Home / Yachts / First Mangusta 165 REV Is in the Water 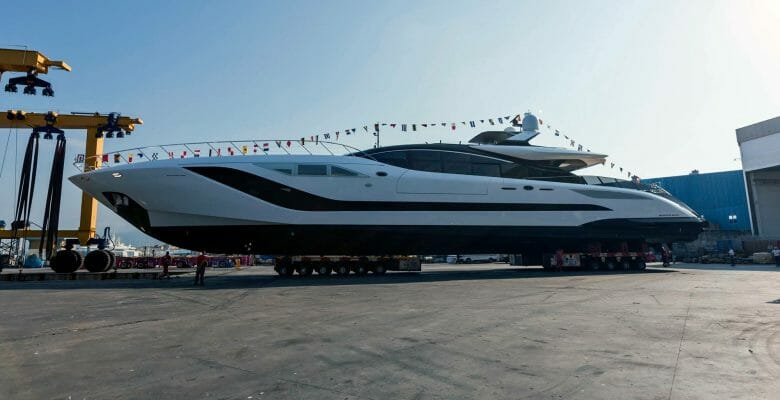 With “REV” meaning a revolution of the brand’s long-successful maxis, the first Mangusta 165 REV launched on July 25 with her owner and family present. The eagerly awaited project has several finishing touches to go before her global debut at the Monaco Yacht Show.

The successor to the Mangusta 165 series—which led to a dozen contracts—the new megayacht series features styling by Lobanov Design. Previously, the shipyard and studio collaborated for the 104 REV. The two all-composite series share family looks, with sweeping, assertive, racy styling. They share naval architecture by the yard’s engineering division, too.

That naval architecture affords Mangusta aficionados with spirited performance. The first Mangusta 165 REV has quadruple Rolls Royce engines with quadruple Kongsberg-KaMeWa waterjets. Sea trials should confirm a maximum top speed of 34 knots. Notably, even though the megayacht achieves similar speeds to her predecessor, she consumes less fuel. In fact, according to the shipyard, she burns about 30 percent less when knots are considered side by side. Additionally, since clients still want to cover good distances at slower speeds, the first Mangusta 165 REV should allow cruising at 10 to 12 knots while burning comparably to same-size displacement yachts.

Whether at those speeds or at anchor, the owner and his family have an entirely personalized interior to enjoy. They brought in their own design to work alongside the shipyard team. Surely, the family will spend good time in the saloon, where fold-down balconies on each side expand the sense of space. Of course, the lower-deck beach club will be a draw, too. Since the tender launches from a separate compartment, the beach club is a dedicated waterside lounge. Another waterside lounge of sorts sits on the foredeck. It’s a 472-square-foot (69-square-meter) leisure area with seating, sunpads, an infinity pool, and a bar.

When it’s time to rest, the owner can indulge in 990 square feet (92 square meters) of peace and quiet on the main deck. The master suite further has floor-to-ceiling windows to welcome the morning. Family and friends, meanwhile, have four standard staterooms and one VIP below decks on the first Mangusta 165 REV. (On a related note, the series offers just four staterooms below as an alternative. The extra cabin therefore can be a gym or media room, for instance.)

While the shipyard prepares this launch for her final steps, it has another hull in build. That next-available Mangusta 165 REV is under construction, for delivery a year from now.