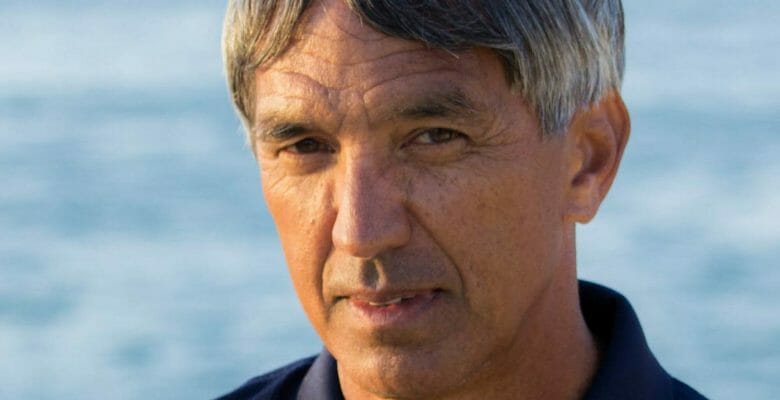 The International SeaKeepers Society not only collaborates with governments, organizations, and individuals dedicated to ocean health, but also honors those making significant contributions to it. Nainoa Thompson (above) is receiving its SeaKeeper of the Year Award this fall for his accomplishments. Among other things, he’s the first Hawaiian and Polynesian to practice the ancient art of wayfinding on long-distance ocean crossings since the 14th century.

In fact, Thompson receives credit for reviving this ancient art. The skills died out following colonization and Westernization of the Polynesian islands. He completed his first navigation using them back in 1980. However, his fascination with it, as well as sustaining the ocean, dates back farther. His father and several mentors during his childhood taught him to appreciate sea life, for example, plus how his ancestors used the stars to navigate. Additionally, he learned important lessons about self-discipline and courage from navigating.

As an adult, Thompson teaches others the navigation arts. This has opened up a multi-generational, global dialog on sustaining the ocean and especially Polynesian marine heritage and culture. Currently, he serves as president of the Polynesian Voyaging Society.

Besides SeaKeepers honoring Thompson, this fall it will further honor Lehua Kamalu (above). She’s a captain and the voyaging director at the Polynesian Voyaging Society. Specifically, she’ll receive SeaKeepers’ NextGen Award. She got her initial start with the Society in handling logistics for its planned worldwide voyage via traditional Polynesian canoe. The voyage began in 2013 and is an ongoing initiative.

The ceremony is set for October 26 in Fort Lauderdale, at a private residence. Tickets are available at the SeaKeepers website.

MegayachtNews.com is a media sponsor for SeaKeepers events throughout the year.