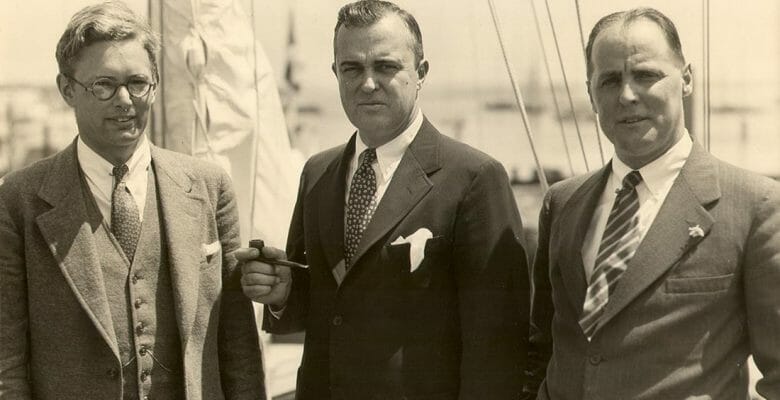 The year was 1929. A then-21-year-old yacht designer partnered with a yacht broker to start a firm specializing in naval architecture, yacht brokerage, charter, and insurance. Little did Olin J. Stephens II (above, far left) know that the firm he formed with Drake Sparkman, called Sparkman & Stephens, would go on to help create more than 2,700 commercial craft, military vessels, and pleasureboats, several America’s Cup defenders, and some of the most famous motoryachts and megayachts on the planet. (Try Dorade, Stormy Weather, and Anson Bell on for size.)

And little did Stephens know that he personally would inspire legions of yacht designers and owners well into this new century. Yes, Olin Stephens will be celebrating his 100th birthday next month. Far be it for me to age someone prematurely, but a man who embraces life such as he does deserves some early happy birthday wishes.

Others in the yacht business seem to agree with my line of thinking, because Stephens and his accomplishments will be toasted through several events over the next few months.

The first will be the Olin Stephens Regatta in The Netherlands from May 30 to June 2. It’s being held in conjunction with the annual meeting of the Sparkman & Stephens Association, comprised of a group of owners of S&S boats. The next event: another regatta in Newport, Rhode Island, from July 19 to 20. Newport is where Stephens grew up, so that’s one significant element of the race. The other is the fact that it’s being held by the New York Yacht Club, which has played a big role in both his success and that of S&S. If you’ve never been to the club (whose facade resembles that of a ship), trust me when I say taking a walk through the famous model room is like an education in S&S yacht design.

Yet a third race will celebrate Stephens’ life. Following a party to be sponsored by S&S, Doyle Sailmakers, and the Castine Yacht Club in Marblehead, Massachusetts, at the Eastern Yacht Club, several S&S yachts will race from there to Castine, Maine. This will precede the Down East Race Week in August, which is expected to attract more S&S designs than previous years.

Not bad for a man who, when I met him about five years ago, struck me as being one of the most youthful people in this business. Happy birthday, Olin. May you live to see another hundred years.