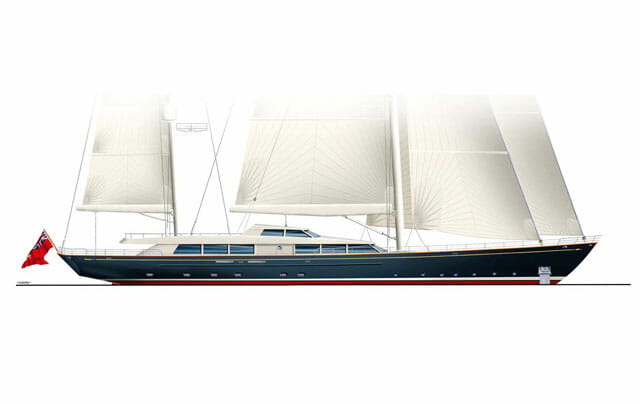 It’s a design so nice, they’re doing it twice – sort of.

Nazenin V, designed by Sparkman & Stephens and built by RMK Marine, has spawned a similar-styled larger version. The unnamed 56-meter (183-footer) is illustrated here, a ketch intended to explore the world.

Why collaborate on a similar design? Both firms anticipate the lessons learned the first time will result in a faster and more efficient build. They plan to approach many of the same subcontractors and suppliers used for Nazenin V. They also liked the look that Nazenin V incorporated. Consider that she herself was inspired by a 37.5-meter, Nazenin IV, which Sparkman & Stephens also designed (but built by Palmer Johnson), so that adds to the reasons.

The 56-meter will have similar hull lines to her smaller sister, but some changes were necessary. The larger overall dimensions, desire for more sail area, and desire to keep draft from being too deep require the inclusion of a daggerboard. With it up, draft should be 4.5 meters (just shy of 15 feet); daggerboard down, draft will be 7.5 meters (24’7”).

As for the sail area, it should be about 1,400 square meters (15,070 square feet). Sparkman & Stephens has specified a carbon fiber mast for the all-aluminum yacht. Roller booms, furling headsails, and below-decks captive winches for controlling the sailing lines are also being installed. Between the twin flying-bridge helm stations and the wheelhouse helm, there will be all-weather operation stations.

Of course, owners and guests prefer weather to be cooperative, so that they can enjoy all of a yacht’s amenities. The larger flying bridge accommodates plenty of space for sunbathing, as well as a Jacuzzi. There’s also alfresco dining. Five staterooms, including an aft owner’s suite, will be below decks, as will a gym. Should extra guests come onboard, the gym can convert to sleep two. There’s also dining for 12 on the main deck, an office forward of here, and the traditional saloon aft, leading outside to a bar and social cockpit. 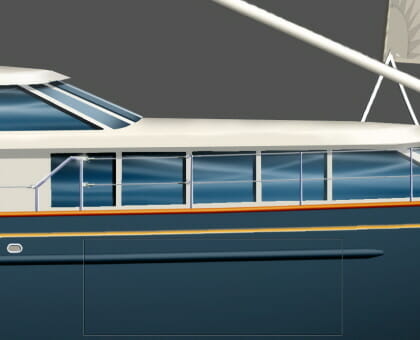 Sparkman & Stephens is keeping traffic flow between the decks centered on each level, so that crew and guests don’t get underfoot one another. The 11 crewmembers also benefit from dedicated passageways for servicing staterooms. Even better, however, is the feature seen here: a fold-down door close to amidships. There’s one to each side, in fact, with the starboard door serving as the primary tender boarding area, and the port door serving as a provisioning door. Bruce Johnson, chief designer of Sparkman & Stephens, says these solutions are far safer than fold-down transom hatches in cases of pitching. From a practical, everyday standpoint, too, the fact that the provisioning door is adjacent to cold-storage rooms and the amidships, two-level engine room will see it put to good use.

No launch date has been given yet for the 499-gross-ton yacht.

UPDATE, MARCH 13, 2012: An updated rendering and more details are now available about the world-cruising ketch. While her profile appears quite similar to that of Nazenin V, there are some customized details. The new megayacht has a bit more rake in her transom and more roundness toward the bow. Inside, four guest staterooms accompany the master suite, which is fully aft on the lower deck. There’s also a gym below decks. One level up, the saloon boasts 270-degree visibility. Besides the traditional dining room forward of here, there’s additionally an office. And, of primary importance, Sparkman & Stephens has dedicated space for vertical circulation. Besides the obvious benefit, allocating specific space for this keeps gathering areas intact. 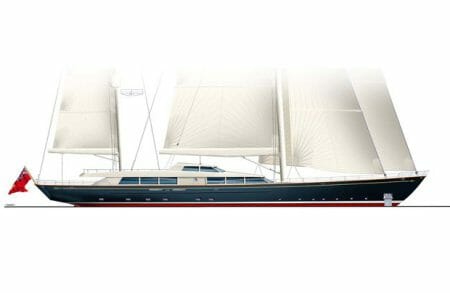 For the crew, Sparkman & Stephens includes a port-side provisioning door right next to the cold stores on the lower deck. The design team further includes a starboard-side, fold-down hatch adjacent to the engine room for tender boarding. The main galley is forward, with direct access to a pantry on the main deck. And, all crew cabins, including the captain’s, are fully forward.

Furthermore, RMK Marine and Sparkman & Stephens are working on a 131-foot (40-meter) version of a world-cruising ketch, for yet another client. Just like the project featured here, she was inspired by Nazenin V. No other details are available at this time.