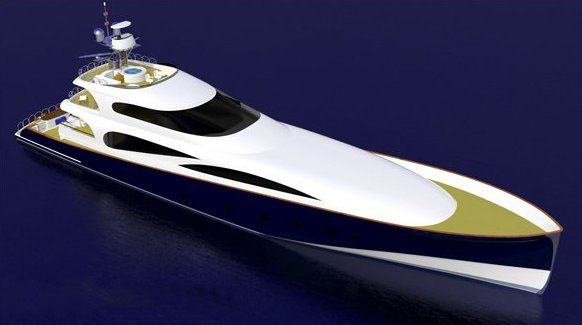 Is it a motoryacht, or a sportfisherman? Both.

Meet a 53-meter (174-foot) cockpit motoryacht that blends the looks and performance of a canyon chaser with the luxe amenities you’d expect of a megayacht. The design is being promoted by Sharp Design Naval Architects and Evolution Yachts Worldwide, the latter being the team that built the strikingly different Salacia in 2005 and which created much of the furnishings aboard White Rabbit from North West Bay Ships, also in 2005.

To be built with an aluminum hull and a composite and carbon fiber superstructure, the concept further calls for a plumb bow. The hull is designed and engineered for the hard charging routinely practiced by fishing fanatics: a deep V, with some sections raked or angled to push water aside and allow better backing down on a fish. Zeus drives from Cummins MerCruiser will help the captain maintain control and enhance maneuverability. This is the largest yacht planned to date to feature Zeus pod drives, which so far have been employed mostly in the production-boat realm. Interesting enough, Doug Sharp, principal of Sharp Design, says that there are no lightweight pod drives yet in the yachting realm that can be coupled to the horsepower demands of the engines the team selected, which are twin MTU 20V4000 M93 diesels. However, he points out that design proposals do sometimes lead to technological developments, so that is the anticipation in this case. If it does happen, the yacht should have an anticipated top end of 33 knots.

Long expanses of glass create side windows, but there’s also the trademark wrap-around windshield of many sportfishermen for the pilothouse. Another fishing feature: a California deck, a raised portion of the cockpit that’s ideal for watching lines or sitting and enjoying the action. A settee and table will be installed here, for convenience. Hopefully there will be plenty of action to watch from the seating, given the inclusion of fighting chairs and multi-chamber livewells in the cockpit. Of course, for days when simply enjoying an anchorage are planned or alfresco dining is on order, the settee and table will accommodate those.

When fishing is over, or for buyers who like the look but don’t plan to wet any lines, the interior will be on par with that of traditional megayachts. The saloon will benefit from full-height windows and sliding glass doors aft, as will the skylounge. Below decks, the master and four guest staterooms should keep everyone comfortable. On sunny days, the uppermost deck will be the place to spread out, featuring a handful of sitting and sunning spots and, of course, a hot tub.

As for tenders, to keep the profile uninterrupted, they’ll be stowed in a foredeck garage.