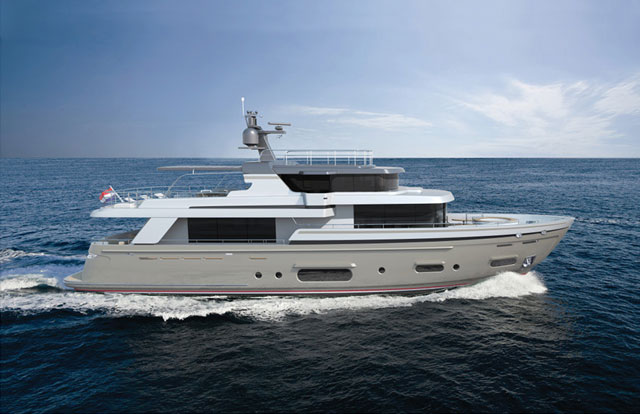 The megayacht business has long been an international one, and the new partnership among Intec Marine Shipyard, Guido de Groot Design, and Sharp Design underscores it. The first two companies are Dutch, while the latter is American. The three have joined forces for the Intec Marine 90 (pictured) and Intec Marine 140, two megayachts promising more environmentally friendly operations.

Intec Marine Shipyard was founded 15 years ago and is a family-run yard, building yachts and megayachts to 197 feet (60 meters). It also performs refits. About five years ago, its principals state, it began focusing on energy efficiency and reduced emissions. The Intec Marine 90 and Intec Marine 140 will both feature hybrid (diesel-electric) propulsion that the shipyard is developing with Voith. Voith is a major supplier of diesel-electric systems and related components for offshore supply vessels, ferries, workboats, and other commercial craft. It also supplies traditional hydraulics and stabilizers for megayachts.

The builder selected Doug Sharp of Sharp Design for the megayachts’ naval architecture and Guido de Groot of the eponymous firm for styling and interior design. Since noise pollution is equally of concern, the team is focusing on keeping sound and vibration low. The trio is also evaluating the best ways to use sustainable materials in construction. To that end, for example, Intec Marine Shipyard is considering having the Intec Marine 90 meet RINA Green Star classification standards. Lloyd’s class is an alternate.

Both the Intec Marine 90 and Intec Marine 140 will be trideck designs. The 140’s features have not yet been revealed, though the 90 will have a formal on-deck dining area leading out to an alfresco seating area. A hot tub will also be near the seating. Solar panels will further be fitted on the overhang of the uppermost deck.

For further information directly from Fraser, please fill out our contact form.

UPDATE, AUGUST 28, 2012: Some further details about the megayacht projects are now available. First, the Intec Marine 140 should see a 25-knot top speed. (No speed predictions yet for the Intec Marine 90.) Both megayachts will further employ small wind turbines and fuel cells to generate electricity and power systems. The fuel cells are of note particularly for areas where low or no carbon dioxide and nitrogen oxide emissions are permissible. As for other items, rather than featuring teak decks, both yachts will have Esthec’s composite decking. And, both will have more environmentally friendly antifouling paint developed in conjunction with TNO Delft. The latter is a research company focused on furthering companies’ sustainable competitive strength and benefitting society as a whole.

Finally, Intec Marine Shipyard is also building new “green” yacht-construction facilities, too.  It plans to use wind turbines on the roof and solar panels to power most operations. In addition, the building will be heated via geothermal power, further using a system that generates energy from biomass.