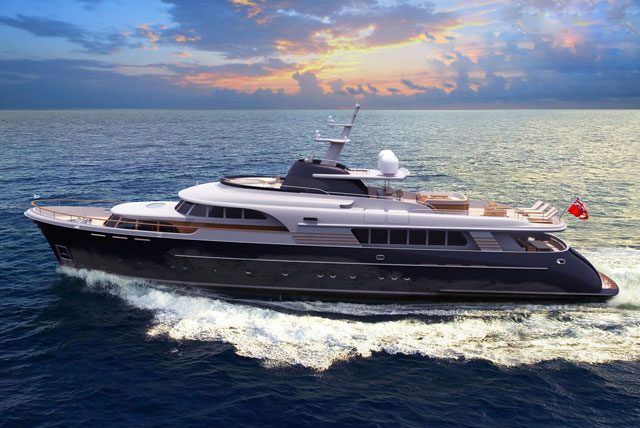 Sometimes the way forward is to take a step back—in time. That’s what Guido de Groot is doing, with this Streamliner concept megayacht design.

Inspiration came partly from the late Raymond Loewy, the most prominent industrial designer of the late 20th century. Loewy’s notable achievements include the slenderized Coca-Cola bottle, the Lucky Strike cigarette package, locomotives for the Pennsylvania Railroad, the Greyhound bus logo and buses themselves, and some Studebaker automobiles.

Like the buses and bullet-nosed Studebakers of the early 1950s, plus the Studebaker luxury coupes of the early 1960s (below), the Streamliner megayacht design is sleek. (Dare we say streamlined?) Despite classic-yacht styling features, however, the Streamliner offers modern design elements. A fold-down balcony (below) complete with swim ladder, lies off the forward master suite. And that master is actually split over two levels, with part of it forward of the raised pilothouse. Another thoroughly modern element: the inclusion of a sauna, just off the balcony.

More modern arrangements are found on the sundeck, broken up into different levels. The funnel may look classic, but cleverly conceals a pantry, which has direct access to the bar area. And, atop the funnel lies an extra helm station/crow’s nest.

Of course, the Streamliner also has features you’d expect of a modern megayacht. These include all-teak decks, a toy garage (with an integral launching system, a nice touch), and a handful of alfresco relaxation spaces.

The Streamliner project was created with project manager Horst Seibold of IYTEG and Doug Sharp of Sharp Design. “When I was doing a project together with Horst in Taiwan four years ago, we went through some old concept drawings in one of my sketch books,” de Groot explains. “We both thought that it would be a pity not to do something with the retro-style sketches in those books. From there on we started to work on the Streamliner concept yacht to the level as it is today, which includes a detailed design, a tank-tested hull, and a thorough specification.” Of course, de Groot adds that the Streamliner can still be adapted to an owner’s or shipyard’s wishes. In fact, he even has a trideck version in development.

If you’re interested in receiving more information directly from Guido de Groot about the Streamliner design, please fill out our contact form.