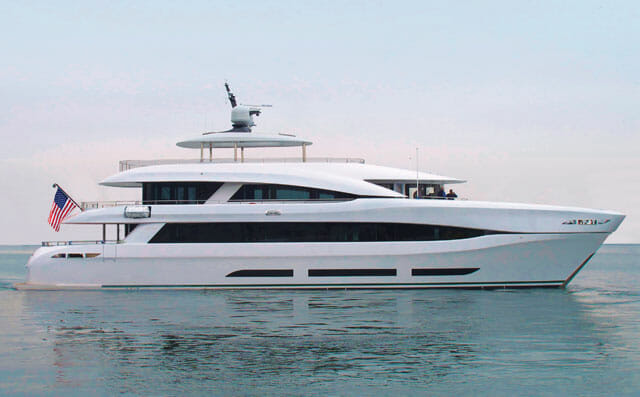 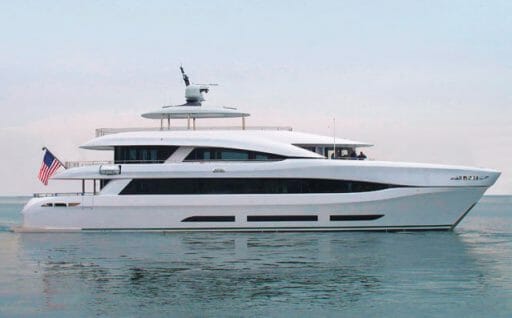 The first Curvelle megayacht, in the company’s Quaranta series, made her way from her construction shed in Turkey to the water a few days ago.

You may recall that Curvelle was founded on the idea that power catamarans are catching on with yacht buyers. To that effect, the Quaranta model features naval architecture by catamaran expert Incat Crowther, with styling and interior design by Lila-Lou London. Curvelle contracted Logos Marine to build the all-fiberglass megayacht, which measures 110’6” (33.7 meters) and has a 29’5” (9-meter) beam. Eagle-eyed readers will note an American flag on the transom in the photo; that’s due to a little creativity on the part of Curvelle’s marketing team, as the Quaranta actually had the Turkish flag on her transom at launch.

The photographic creativity underscores the fact that the Quaranta model should have appeal on both sides of the Atlantic. It’s partly because all six staterooms are on the main deck and can be converted into three suites, flexibility not seen on a yacht of this size. Another touted feature is the swim platform’s ability to rise up to the main deck, for guests in wheelchairs or who otherwise have difficulty getting around.

Curvelle is conducting sea trials now and expects the Quaranta megayacht to top out at 25 knots and cruise at 22 knots. She’s powered by twin 1,900-hp Caterpillars. She’s also classed to RINA and meets MCA requirements.

Delivery is set for May 1. The Quaranta will then be part of the central charter fleet of Hill Robinson, plus tour major yacht shows in Europe and the United States.