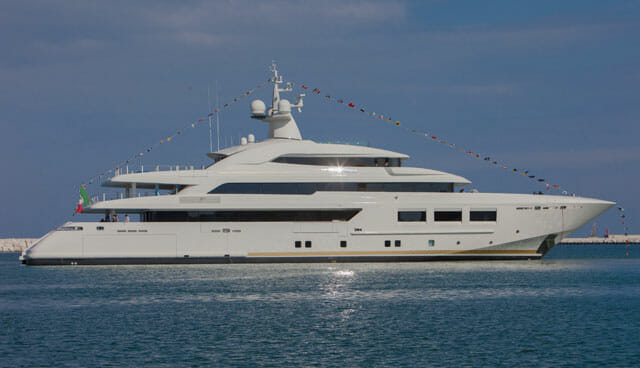 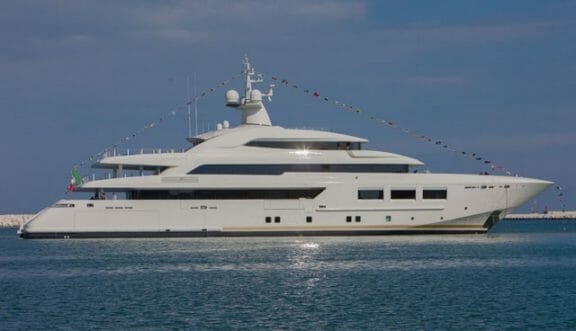 This 201-foot (61.3-meter) megayacht, initially known simply as CRN 133, her hull number, but now showing her nameplate, Saramour, splashed this morning at the Italian shipyard. She’s noteworthy particularly for two reasons. First, Saramour is the eighth megayacht in the 60-meter (197-foot) range to launch in 10 years at the builder’s Ancona facility. Second, she’s the first CRN to feature an entire deck solely for the owner’s use.

Saramour,being delivered in the spring, bears naval architecture from the builder’s in-house team and styling and interior design by Francesco Paszkowski. As you’d expect, she’s a displacement megayacht, expected to cruise at 14 knots with Caterpillar power. She further has accommodations for 12 in the owner’s party and 15 crewmembers. Nearly all of the accommodations, also as you’d expect, are on the lower deck.

What you may not expect is the upper deck being devoted to the owner. Saramour also has two VIP suites forward on the main deck. The 33’5” (10.2-meter) beam makes for elbowroom-friendly spaces. The owner’s deck, for example, includes a saloon, a study, and alfresco dining. A central elevator aboard Saramour yields access to here from other decks. More private alfresco enjoyment is fully forward on the owner’s deck, with a hot tub and sunning space.

What you also may not expect is that Saramour has five decks. It’s due to what CRN calls a fly deck being added. It’s not a flying bridge, however, as there’s already a sundeck aboard the megayacht—and indeed all other megayachts in this size range. Rather, it’s a deck that mixes additional relaxation areas with the captain’s cabin and wheelhouse. Specifically, Saramour has a hammam and gym (with a skylight, a nice touch) here, aft of the elevator lobby. It’s more common to see these rooms on a lower deck, or on two different decks, within a four-deck frame. Naturally the captain’s stateroom and wheelhouse are forward.

Saramour doesn’t break with tradition everywhere else, however. You’ll find a beach club, two tender garages just forward of the engine room, and a sundeck with a hot tub aboard. Three guest staterooms are on the lower deck, and a customary saloon and formal dining area are on the main deck.

Saramour should set off on sea trials in April.