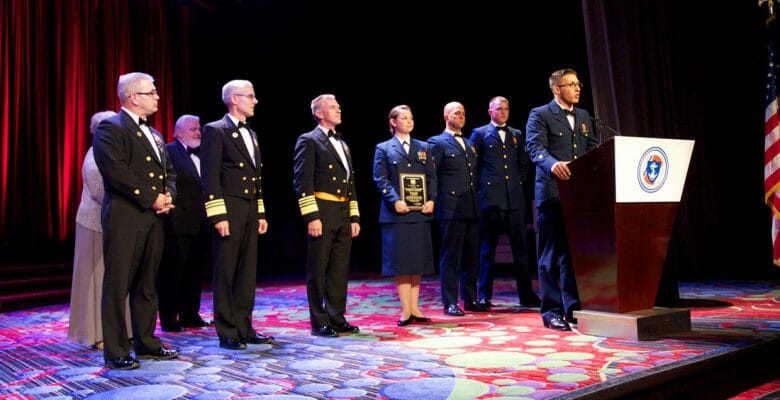 Annually, the Coast Guard Foundation hosts tributes around the country to recognize the efforts of the U.S. Coast Guard. One of the foundation’s oldest and most prominent tributes, the Salute to the U.S. Coast Guard in New York City, is celebrating its 35th anniversary on October 8. With big milestones come a big speaker: Capt. Chesley “Sully” Sullenberger from the U.S. Airlines flight dubbed the Miracle on the Hudson.

The non-profit Coast Guard Foundation provides scholarship, financial relief, and other assistance to Coast Guard members and their families. The Salute to the U.S. Coast Guard in New York City will honor a select number of active-duty members for their heroism and dedication to helping those at sea. The organization will further honor Mike Petters of Huntington Ingalls Industries, the United States’ largest military shipbuilder, for his long-standing support. Petters is, among other things, on the board of directors for the U.S. Naval Academy Foundation, on the board of trustees of the Naval Aviation Museum Foundation, and on the advisory council for the Naval Historical Foundation.

Also at the event, being held at the Marriott Marquis, Sullenberger (left) will be one of two keynote speakers. Sullenberger often speaks on the subject of safety, further serving as the aviation and safety commentator for CBS News. Of course, Sullenberger came to national attention in 2009 when he landed U.S. Airways flight 1549 in the Hudson River following both engines of the aircraft becoming disabled from a bird strike. The second keynote speaker: Admiral Paul Zukunft, commandant of the Coast Guard. As Commandant of the Guard, he leads the largest component of the Department of Homeland Security.

Tickets are available for Salute to the U.S. Coast Guard via the Coast Guard Foundation’s website. The master of ceremonies for the evening is Gus Rosendale, a news anchor with NBC 4 New York.