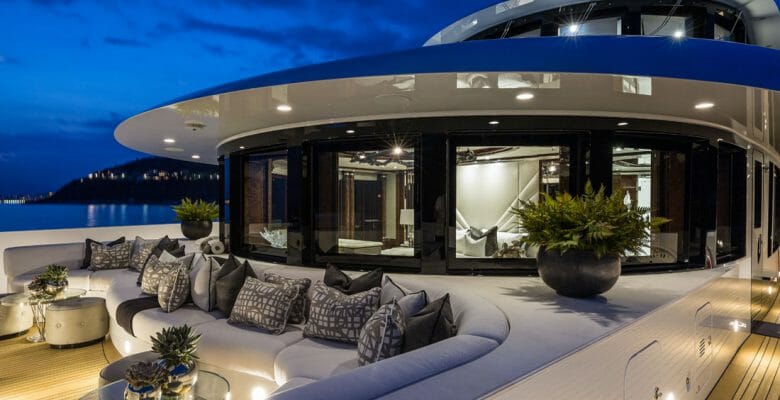 The challenge the owners of 11∙11 gave Benetti was akin to throwing down the gauntlet. The 207-footer (63-meter) needed to be finished in 10 months’ time—nearly entirely redesigned inside, and partially outside, too.

Construction had started on 11∙11 under a different owner, who stepped out of the contract. When the current owners acquired her in summer 2014, the megayacht was getting her decor. Dark woods and abundant opulence were the original concepts. 11∙11’s owners kept the wood and softened the ambiance, literally and figuratively. They have a toddler, so sharp edges on furnishings were a no-no. They wanted soft, family-oriented seating, too, particularly in the saloon and skylounge. Overall, 11∙11 needed to feel like a floating home. 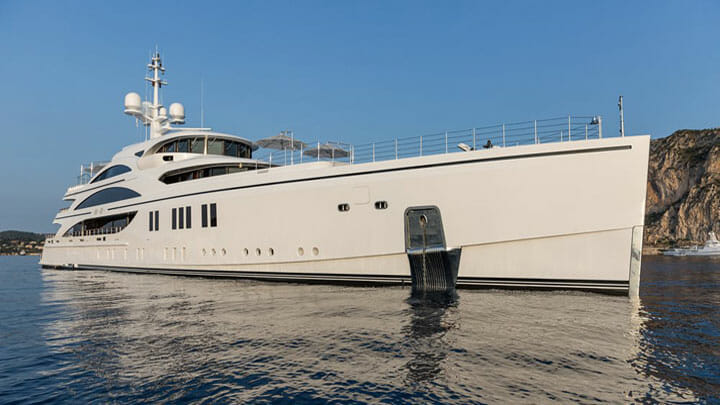 It works. The master suite, overlooking a private sunning/seating area forward (complete with a hot tub, too), has an adjacent kids’ cabin. There’s a second master, too, spanning the 35’3” (10.8-meter) beam on the main deck. Other family members and friends get four staterooms below decks. They’re outfitted, like the rest of 11∙11, with elements echoing Art Deco, personally chosen by the owners. They didn’t hire an interior designer, preferring to handle things themselves. It’s familiar territory. The husband has purchased three Benettis previously, plus co-owns a design firm.

Abundant stone adorns 11∙11. More than a ton was used for the bar on the upper deck alone. Sanblasted stone was carved to make yet another bar (there are several onboard) on the sundeck. And speaking of the sundeck, Benetti essentially stripped it to reconfigure it. This allowed relocating the pool aft, and adding seating and a meal-prep area in place of a gym.

Here’s more of 11∙11. Take note of the custom tender, the first ever made by Benetti. Note, too, the megayacht’s vertical bow, Benetti’s second. Inside, you’ll see a variety of textures, tones, and art all meant to delight the senses.