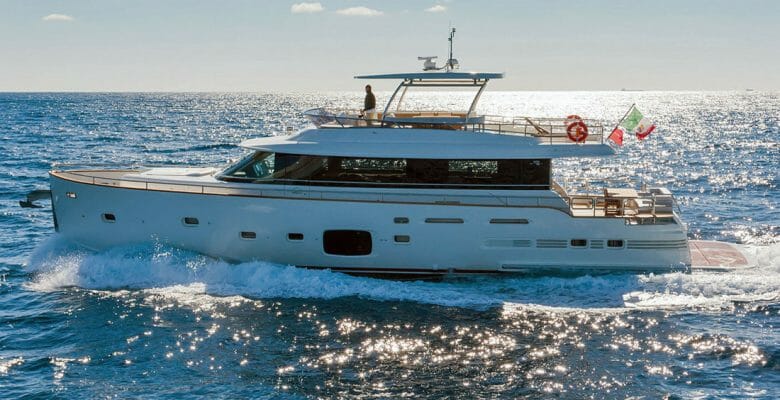 About four years after the series was introduced, an Azimut Magellano 76 is cruising stateside.

The yacht was delivered to her U.S. owners this month by MarineMax, the American dealer for Azimut. Representatives of MarineMax say the owners were already Azimut customers, having had a sleek 55S. Interestingly, though, they weren’t immediately sold on another yacht from the Italian builder. They wanted a bigger, longer-range yacht compared to the 55S and reportedly looked at a number of other brands. They ended up selecting the Magellano 76 because of the size, the emphasis on longer cruising, and the styling, among other reasons.

The 76 is the largest yacht thus far in Azimut’s shippy-looking Magellano series. She’s fitted with a hull designed for comfort and efficiency at both displacement and planing speeds. Azimut says she cruises best between 11 and 17 knots, with 1,000-hp MANs. Expect a range of a few hundred miles at all of those speeds. Top end for the Magellano 76 is said to be 22 knots. The owners plan to put their Magellano 76 to good use in New York waters this weekend.

Another thing that will get good use is the versatile interior. Azimut makes the Magellano 76 available with a convertible fourth stateroom. It transforms into a lounging area/study and is accessible straight from the master stateroom. The master is denoted by the large hull port you see at about amidships.

For a sense of the interior, plus the sundeck and other alfresco areas, check out hull number one of the Magellano 76 series: