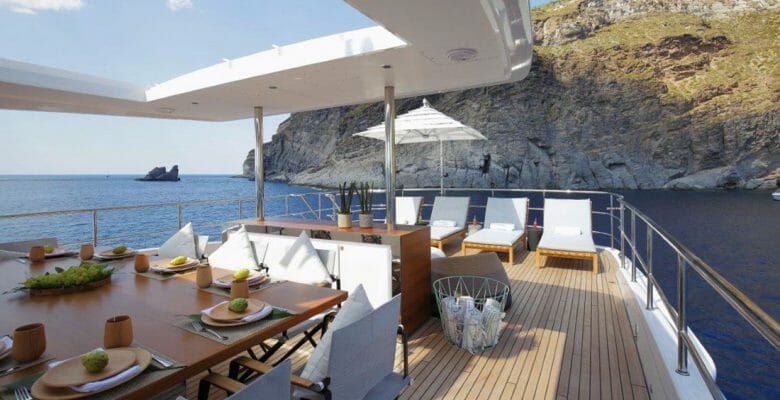 When Benetti announced the Mediterraneo 116 in 2015, the newest Class line model looked like another classic design.. Fast forward to May 2017, and hull number one, Oli, appeared to be a very different animal. After spending several hours aboard Oli, I came away with the impression that the Mediterraneo 116, while clearly a classic Benetti, was flexible enough to be whatever her owner wants her to be.

In Oli’s case, the Latin American owner wanted a traditional-looking Benetti to accommodate his large, growing family. “My new yacht had to be a place to spend memorable moments with my wife and children,” he says. “Such a place had to be modern and cozy, reflecting my family, which is young and dynamic.” Simultaneously, “I wanted a classic and elegant look, without giving up to modern fads, and still integrating modern features and details,” he adds. 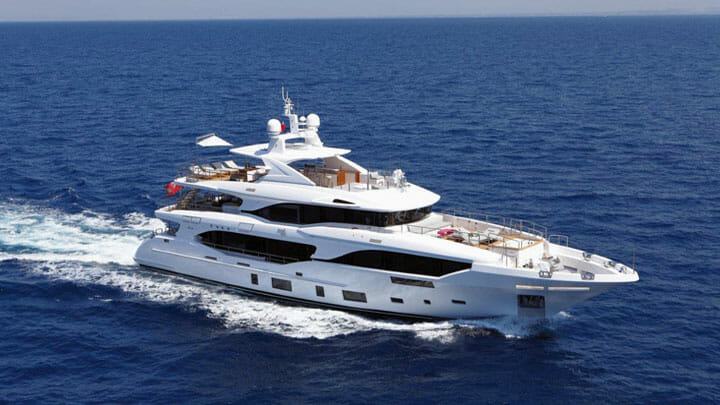 The Mediterraneo 116 fulfills the mission. My first impression of Oli, named after the owner’s wife, was that Benetti did so by designing oversized proportions into the primary social areas. My second impression was that the owner, with Benetti’s in-house design team, created a usable interior that also has simple elegance.

The saloon, for instance, has four floor-to-ceiling windows, each 13 feet long. A full-beam glass door aft completes the open sense. The decor, with white seats, leather end tables, and a bench-style dining table, is Italian designer, but devoid of ornate sculpture or artwork. The gray-blue “Tai mat” oak walls (neutral in color and resistant to UV rays) nicely contrast with the furniture and teak floors. It’s a space that lets kids be kids. 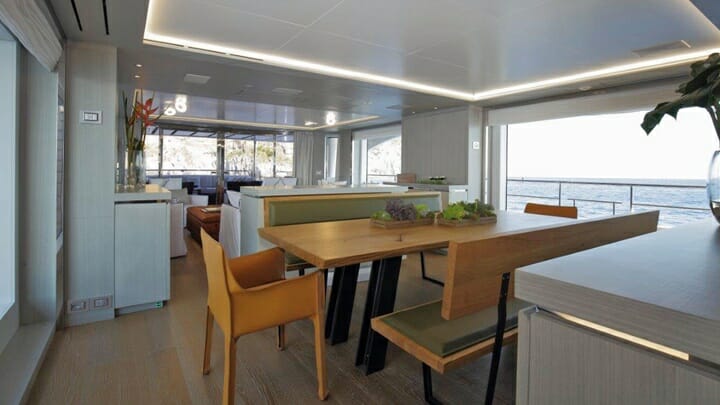 That same sense of functional elegance carries to the deck above. The sky lounge has the same white furniture and ocean views. Aft, the 12-person alfresco dining table turns outdoor meals into a joy. Simultaneously, the dumbwaiter connected to the galley below makes it much easier for the crew to serve.

Oli’s upper deck (top) is also a testament to smart, functional design. Benetti divided the 52-foot-long space into several zones. A small helm (where the owner loves to drive) and large sunbed are up front. A social area with long wetbar and dining table sit under an opening hardtop. Finally, the wide-open deck aft features sun lounges. 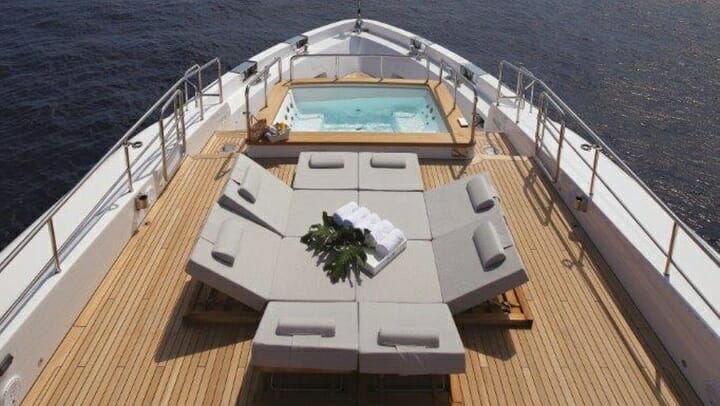 Oli’s most surprising, and my favorite, feature was the foredeck. Benetti created a two-tier layout, with a working bow and, steps above, a social area. Using a hot tub to divide the two was a work of genius. In addition, once again, it makes the Mediterraneo feel like a larger yacht. Benetti supersized this area to excellent effect. The huge center sunbed, shaped like a four-leaf clover, was a nice touch, too.

With a big family in tow, Oli has two doubles and two twins (with an extra Pullman berth in each) below decks. Large windows provide strong natural light and even stronger ocean views. A large window characterizes the study in the owner’s stateroom on the main deck, too. Yet more windows line the full-beam bedroom. Even the six crew have relatively spacious accommodations.

The Mediterraneo 116 is as much for cruising the deep waters in the Mediterranean and Caribbean as she is shallower waters. The 7’1” draft is Bahamas-friendly. With her twin 1,400-hp MANs, Oli can cruise various places to a maximum 15 knots. Her range at 10 knots is 3,000 nautical miles.

With Benetti, customization is expected on a new build. The two Mediterraneo 116s under construction will be quite different from Oli, but no doubt just as special.