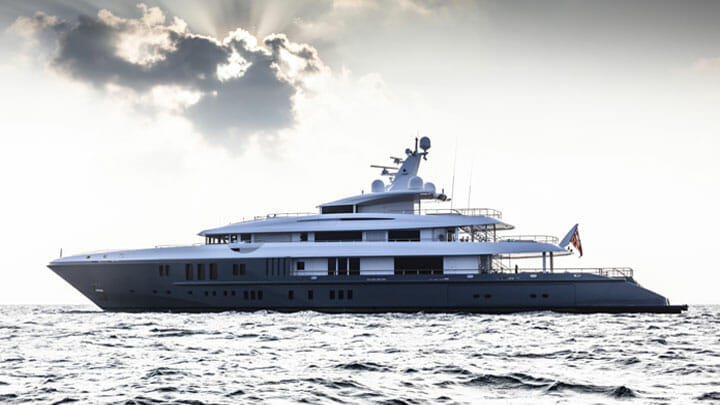 Headlines claiming never-before-seen features can be misleading. The goal is to get you to click and read; never mind that the promise isn’t exactly accurate. In the case of Project 783, though, there’s no misleading. This megayacht’s owner has kept her out of the media since delivery in 2012 from Nobiskrug. In fact, except for occasional yacht-watcher photos, Project 783 (a.k.a. Flying Fox, and project Graffiti) has been immensely private. She doesn’t charter. She’s never exhibited at a yacht show. But, the 241-footer (73.5-meter) will welcome buyers aboard at the Monaco Yacht Show next month. Therefore, we can give you a first look inside and on deck.

Referred to as Project 783 since that’s her hull number, the yacht entered her owner’s hands thanks to Imperial Yachts. Julia Stewart, the managing director, says, “When we introduced Project 783 to the owner, we knew that Nobiskrug would deliver an outstanding result in very good time for our client.” Some time savings came from sharing styling with another Nobiskrug. It’s Mogambo, which was hull 782. Reymond Langton Design makes the sheer size of both yachts seem sleeker. It’s especially true aft at the transom, where the sides slope down (below).

Even with her size, Project 783 has several cozy arrangements inside. The saloon features intimate seating arrangements, for example. They’re strategically alongside the floor-to-ceiling windows, inviting guests to take in the passing scenery while cruising. So, too, is the formal dining area flanked by floor-to-ceiling windows, perfect for enjoying the sights of each anchorage.

Scenery of a different type appears in the two onboard cinemas. One is an indoor theater with plush seating, while the other is up on the sundeck. Come nightfall, a projector in the seating area facing the mast plays guests’ favorite flicks on the screen just opposite.

Throughout Project 783, interior designer Mark Berryman has created a serene environment, with light-tone fabrics and woods such as oak and sycamore, along with bamboo. They extend through the relaxation zones, including the six staterooms. The six are the bridge-deck VIP, the main-deck master, and four guest accommodations below. The master suite is especially light, and tranquil, upon deploying the fold-down balcony (above).

Enjoy this armchair tour of Project 783. Note, too, that at the Monaco show, she’ll be alongside her support yacht 6711, which has accompanied her everywhere for the past three years. They’re both part of Imperial Yachts’ display.