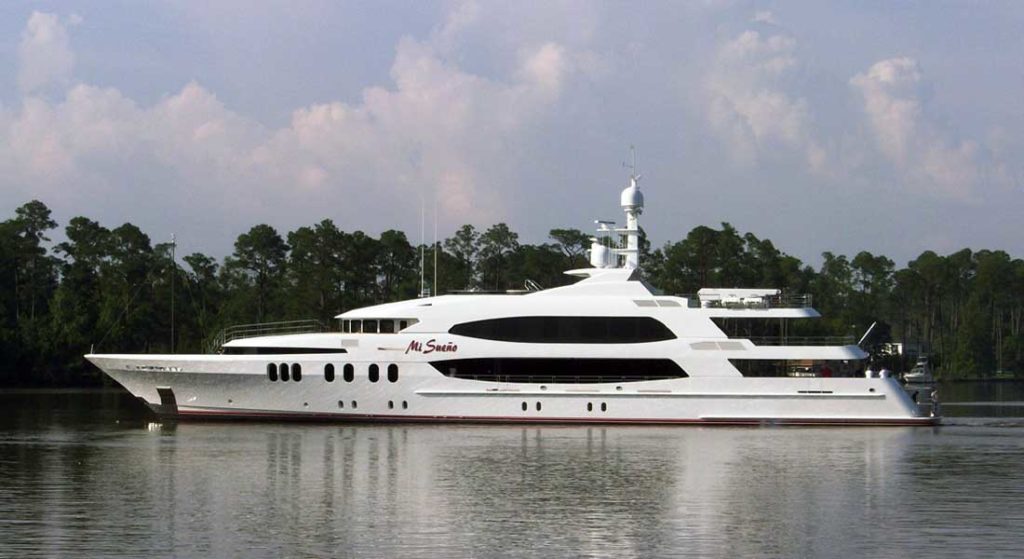 This weekend marks the 150th running of the Belmont Stakes. It’s the third and final leg of the famed Triple Crown, the most coveted title in horse racing. While there’s no Triple Crown in yachting, there have certainly been several horse-racing themed superyachts. Here’s a look at three notable names.

1. Buckpasser. The late Ogden Phipps, who died in 2002, was a horse-racing powerhouse. He and his family ran a breeding empire that produced Triple Crown and Kentucky Derby victors. Buckpasser is arguably the most famous Phipps horse. While Buckpasser missed competing in the Triple Crown due to injury, he did win an astounding 15 consecutive races in the 1960s. Phipps, meanwhile, split his time between homes in New York and Florida. The latter is where he met the late naval architect Jack Hargrave. Phipps commissioned the 108-foot (32.9-meter) Buckpasser, featuring Hargrave’s design, from Burger Boat Company. He took delivery in 1973. Today, Buckpasser is known as Chanticleer.

2. Hurricane Run. This 177-footer, from Feadship, has a significant following on the charter circuit. The British businessman Michael Tabor is her owner, and has been since delivery in 2009. Tabor has the Midas touch when it comes to winning thoroughbreds. The horse Thunder Gulch, for example, won the Kentucky Derby and Belmont Stakes in 1994. Tabor won the Kentucky Derby with High Chapparal in 2002. It’s no surprise, then, that he owned the horse-racing themed superyachts High Chaparral (a Feadship) and Thunder Gulch (an Amels), too.

3. Mi Sueño. Unlike the horses Buckpasser and Hurricane Run, Mi Sueño was a filly in her racing days. She retired due to a leg fracture in 2009, the same year she won two of her four starts. The 190-foot (58-meter) yacht Mi Sueño (pictured) saw delivery by Trinity Yachts the following year. At the time, the shipyard confirmed that the owner of the horse-racing themed superyacht was the owner of a same-named horse. Public records reveal that the horse was owned by Michael Moreno. Mi Sueño changed hands in 2014, gaining the name Skyfall.