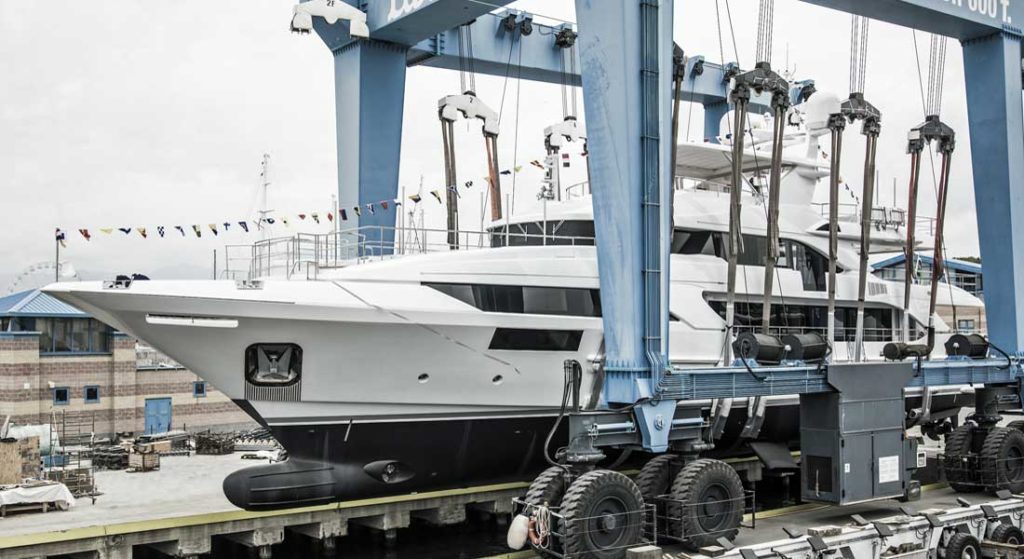 There’s an old saying, “The proof is in the pudding.” It means the end result reveals the degree to which something succeeded (or failed). In Benetti’s case, its Classic Supreme 132 series is definitely succeeding. The shipyard celebrated the launch of hull number 11 on May 28.

When you consider that the series debuted in 2012, it’s a pretty good run. As the model name indicates, LOA is 132 feet (40.24 meters). An all-fiberglass megayacht, she’s continuing to attract interest for a few reasons. For example, the Classic Supreme 132 has a main-deck owner’s suite, occupying the 27-foot (8.28-meter) beam. In addition, the suite includes a balcony. The balcony extends out from one side at the press of a button. When back in place, it appears to be a full-height window, the same as one on the opposite side of the suite.

Those full-height windows characterize the rest of the main deck, too, as well as the upper deck. Bringing the outside in is as important as ever to yacht owners and guests. So, they can enjoy the views whether in the saloon or the skylounge.

Unfortunately, Benetti is not revealing what the interior looks like. Regardless, it does say the owner worked with Ezequiel Farca. He’s a Mexico-based designer, and this 11th Classic Supreme 132 is his fourth Benetti megayacht so far. Ezequiel further worked with Benetti’s in-house design department to outfit all of the areas onboard.

Those areas include the four guest staterooms below decks. Customers can choose the configurations that suit them. This owner requested two doubles and twin twins. Naturally, each has an en suite bath adorned with luxury touches like custom stonework. The seven-person crew for the Classic Supreme 132, meanwhile, gets four cabins, plus a crew mess.

Sea trials should confirm a top speed of 14½ knots and range of 3,200 nautical miles at 11 knots, under MTU power. At either speed, guests will certainly enjoy the sensation on the sundeck.