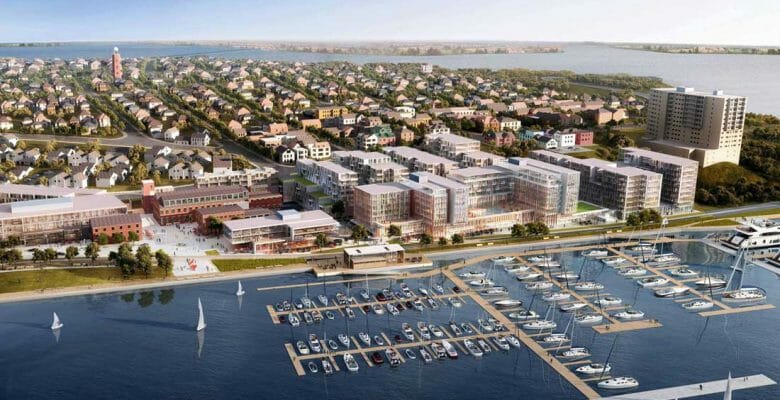 Next summer, cruisers on Casco Bay in Maine can get the IGY Marinas treatment. The company will operate a newly developed property in Portland. Fore Points Marina is set to become the company’s northernmost facility in the United States, too.

With slips for a variety of boats and yachts, Fore Points Marina is entirely new. It’s on the site of a former railroad foundry. Construction is underway to transform the full site into a larger-scale development, Portland Foreside. Portland Foreside is a mixed-use community. Besides the marina, it will include residences, shops, and plentiful pedestrian plazas.

IGY Marinas is branding and managing Fore Points Marina. The marina is owned by the Portland Foreside development company. However, that company has teamed with IGY’s coastal and marina-engineering affiliate partner for design and permits.

Once it opens next year, Fore Points Marina will have slips for 10 megayachts, amid 140 total slips. Just as happens at other IGY Marinas properties, it will also have high-speed fueling, waste management, and a variety of yacht services. Provisioning will be among them. In addition, Fore Points Marina will have a lounge for captains and crew. As for owners and guests, they can take advantage of the development’s restaurants and shops.

Furthermore, Portland itself has a number of existing well-known restaurants, small breweries and distilleries, and of course shops. Conveniently, since Fore Points Marina is downtown in the Old Port neighborhood, many amenities are walking distance away. Cobblestone streets and 19th-century architecture characterize the area. Additionally close by is Portland’s Arts District, with art galleries and museums. Bars, music venues, and other entertainment options are nearby as well.

Casco Bay itself is a popular cruising region, due to the Casco Bay Islands and proximity to Bar Harbor. Tom Mukamal, CEO of IGY Marinas, adds that it’s “one of the most beautiful areas of the Northeast.”