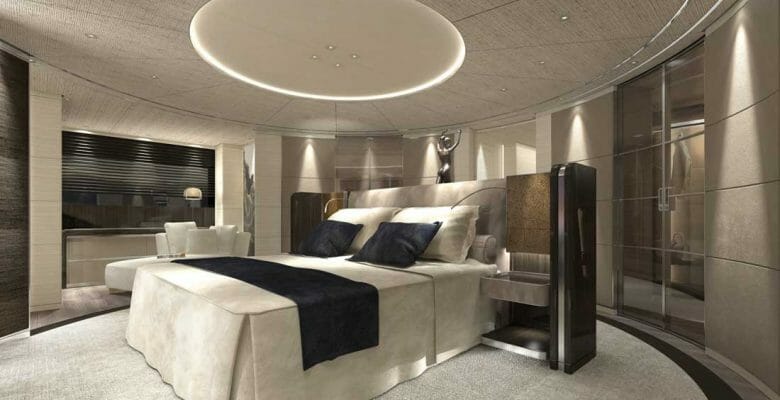 A 180-footer (55-meter) in Baglietto’s T-Line of megayachts remains on pace for launch in about a year’s time. The shipyard is keeping the yacht’s name confidential for now. Regardless, we’re getting some good first looks at the overall design inside and out for Baglietto hull 10225.

The T-Line gets its name from being relatively traditional in appearance (below). “Traditional” applies to the family looks of previous Baglietto deliveries as much as it does classic lines. Specific to this yacht, the hull bears a suitably nautical shade of blue. Also traditional: performance. Expect Baglietto hull 10225 to see a maximum speed of 17 knots under Caterpillar power. Cruising speed should be 12 knots. 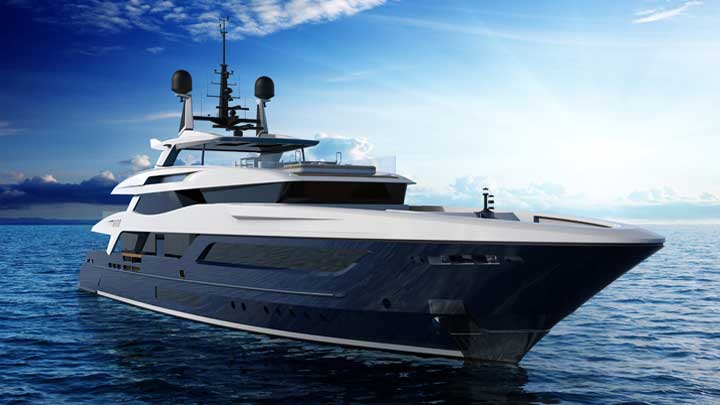 Just as Francesco Paszkowski Design styled the profile, so, too, is he working with the owner on the interior. Joining Paszkowski is longtime collaborator Margherita Casprini. Soft, subdued shades set a comfortable, welcoming atmosphere for the owner and his family—or charter guests, an option. From the beach club, with three fold-down platforms, to the saloon and on up to the upper-deck lounge, several seating arrangements create conversation areas. This, too, interesting enough, suits the T-Line theme.

Anything but traditional, though, is the stateroom arrangement. You’ll still find the master suite fully forward aboard Baglietto hull 10225. It even has a separate office. However, two guest staterooms also sit on this deck. These are for certain family members. They fit on this deck without squeezing the saloon or formal dining area, either. In addition, just two guest staterooms sit below decks. Ordinarily, we’re accustomed to seeing four cabins here. Occupying some of the space instead: the galley. (Conveniently, the crew area sits adjacent, yet still has a crew mess.) The owner decided to situate a final guest stateroom on the upper deck. It features two Pullmans, plus a settee. If it’s not needed for sleeping, it transforms into a playroom, or a massage room. 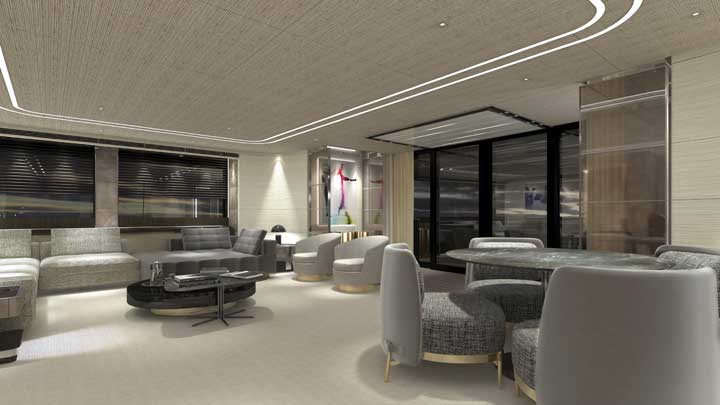 Something the owner decided to keep traditional, though, is the sundeck. Spanning about 1,516 square feet (150 square meters), it’s the place to sunbathe, enjoy lunch, grab a cocktail, or indulge in the pool. Guests can be up here in seconds by stepping into the marble-floored, glass elevator connecting the three decks.