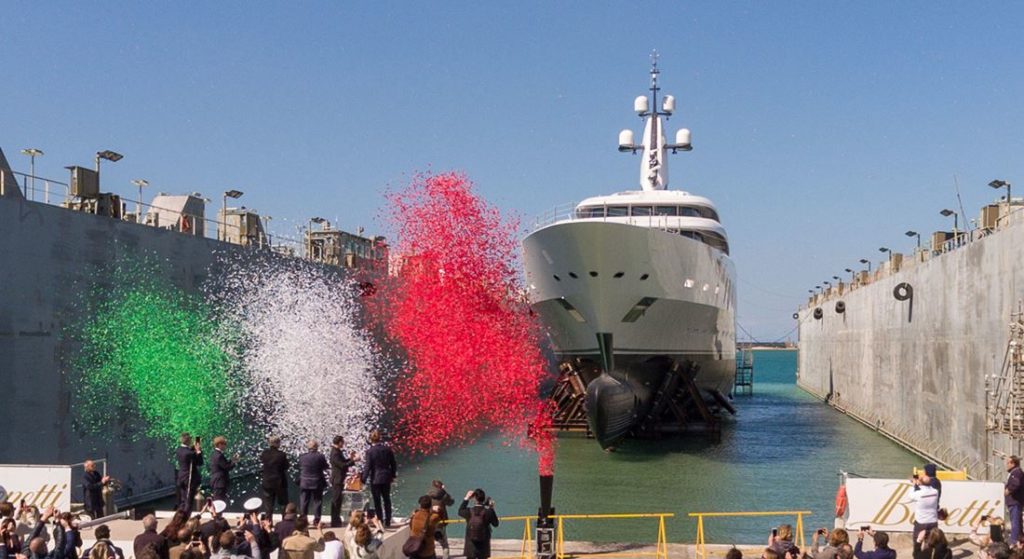 Three yachts each in excess of 100 meters that slip into the water within 100 days of each other. With the launch today of the 354-foot (108-meter) FB275, Benetti marked the culmination of this feat. It comes years after a significant investment in facilities to construct not just mega-size megayachts, but also this many simultaneously. Interestingly, as much as Benetti FB275 is a conclusion, she’s also just a beginning—for both the owner and the builder, which intends to keep focusing on this size.

With a 47’6” (14.5-meter) beam, and a 14’4” (4.4-meter) draft, the steel-hulled megayacht has some even more remarkable numbers associated with her. For instance, more than 10,764 square feet (1,000 square meters) of alfresco space spans her five decks. In addition, Benetti FB275 should see a top speed of 18.5 knots under MTU power. Dropped back to 15 knots, the megayacht should see a 6,500-nautical-mile range. A Schottel azimuthing thruster aft is powerful enough to propel her short distances. Therefore, Benetti FB275 can, when desired, run solely on electric, not diesel. Her Rolls Royce bow thrusters integrate with the stern thruster for station keeping akin to Dynamic Positioning. Finally, About 91,139 gallons (34,500 liters) of fuel make voyages possible, too.

Of course, the creature comforts aboard a yacht of this magnitude should be plenty comfortable. To that end, Benetti FB275 has an entire owner’s deck, with a private dining area. All guests can dine together on the main deck. However, the main draw on this level is the swimming pool. As you’d expect, the yacht has sunning areas, including some on the bridge deck. These further group around a fire pit. Fitness buffs can work out in the gym, meanwhile, which additionally has a sauna. For entertainment, the cinema will welcome everyone. And, when it’s time to play on the water, eight PWCs and several tenders stand ready. Toys stow in a garage as well as on the foredeck. 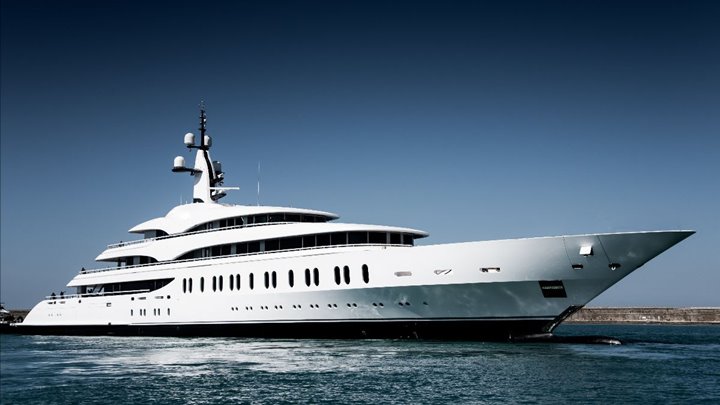 Of all the places onboard, though, perhaps the best is at the very top. Benetti FB275 has an observation deck. Between the views and the circular seating, encouraging conversations, it promises to get plenty of use.

With styling by RWD and interior design by the yard, Benetti FB275 is larger, and of course different, than the two previous mega-size launches. Benetti FB277, decidedly modern-looking, kicked off “giga season” for the shipyard, in December. When Benetti FB272 launched in February, she was a bit more classical.

As mentioned above, this project marks a beginning for Benetti. The builder intends to continue pursuing quite large megayachts. “The launch of FB275 marks the culmination of the first part of our Benetti Giga Season, yet at the same time, begins a new era of building giants,” Paolo Vitelli, president and founder of Azimut-Beneti Group, says.