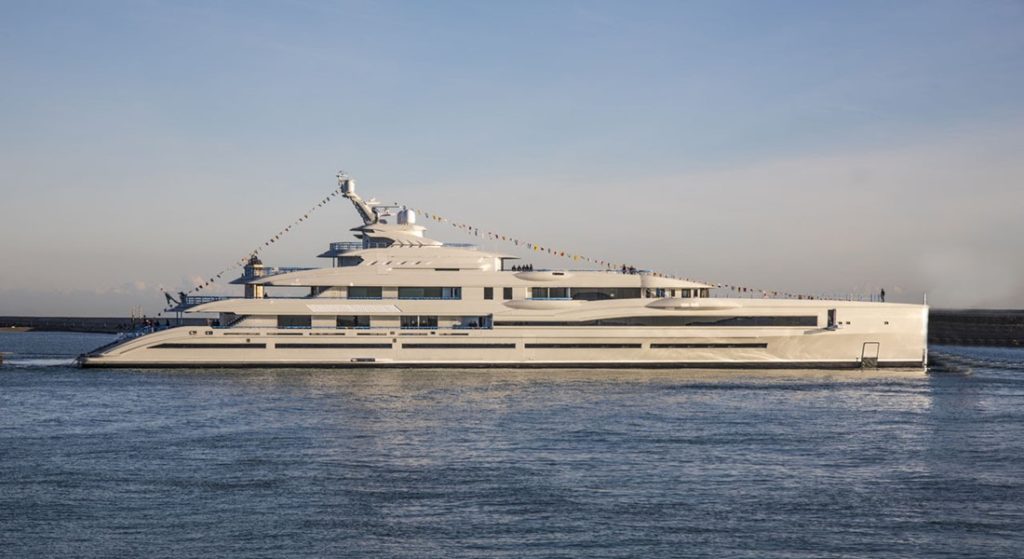 UPDATE, DECEMBER 19, 2018: Benetti FB277 celebrated her official launch yesterday. Coinciding with it, the shipyard is revealing several details for the first time.

The massive megayacht features seven guest staterooms on the main deck, for instance. All sit forward of the formal dining room and saloon. This, in turns, opens up about half of the lower deck for crew accommodations. More crew cabins are a level beneath that. In addition, Benetti FB277 treats the owner to a vast stateroom—suite, truly—on the wheelhouse deck. Balconies to both sides invite him to step out and enjoy the view day or night. For entertainment, the suite is convenient to the upper saloon, featuring a piano and large screen for movies.

The owner and all guests who’ll cruise aboard Benetti FB277 have a generous beach club to indulge in, too. Fold-down platforms on three sides open it up even more. To cap off a relaxing day, they can spend time in the nearby spa, with a hammam and massage area.

December is the start of the winter season for residents all across the Northern Hemisphere. At Benetti, at least for this particular year, it’s also the “Benetti Giga Season.” That’s the nickname the builder is using in honor of launching its largest-ever megayachts in the coming weeks. Benetti FB277 is the first. Although she hasn’t yet formally launched, she is, for the first time, visible to the public.

In 2014, Benetti revealed it was building two 100-meter-plus megayachts, which it alternately calls gigayachts. It actually has three such projects, in various stages of construction. Benetti FB277, so-known because it’s her hull number, is the initial launch. In fact, the shipyard will slip her into the water at its Livorno, Italy facility on December 18, during a private ceremony. 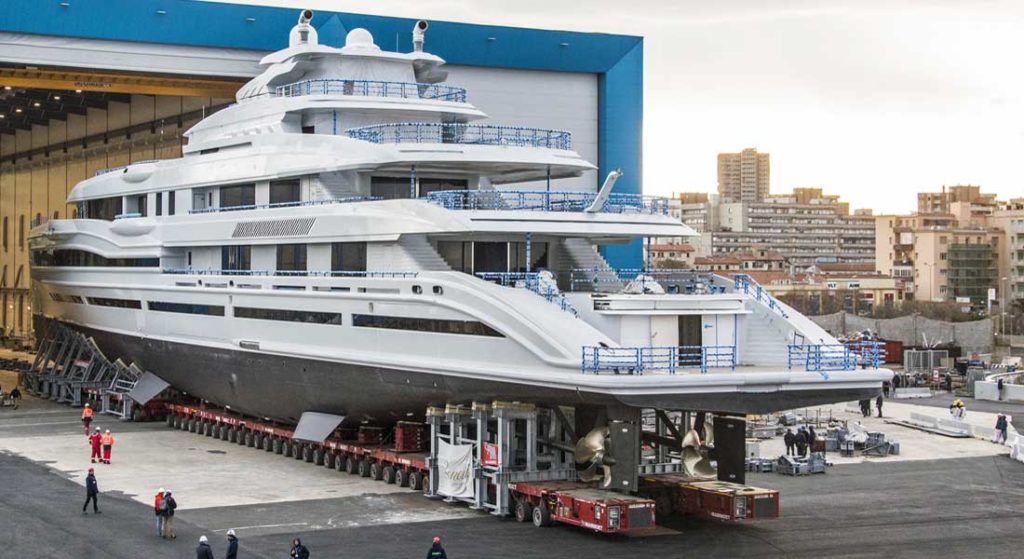 Most of the details about the megayacht are private, too. That’s been the case since the builder made the initial announcement four years ago. Among the details we can share, however, Benetti FB277 is a 351-footer (107-meter). The owners and guests should enjoy ample interior and alfresco spaces, given a beam of 49’9” (15.2 meters). Volume is equally massive, a full-load displacement of 3,300 gross tons. Naturally, as you would expect of a mega-size megayacht, construction combines a steel hull and aluminum superstructure.

No information is available at this time on Benetti FB277’s general arrangement, from either Benetti or the owners’ project manager, Imperial Yachts. Neither are facts about the other 100-meter-plus projects coming within the next few months.

As mentioned, all three projects mark the largest megayachts in Benetti’s history. The record holder has been Lionheart, launched in 2016. Her LOA: 90 meters/295 feet. Prior to that, Benetti made history both for itself and for a yacht builder as far back as the 1970s. Late that decade, it signed a contract for the late Adnan Khashoggi, the high-profile Arab businessman who lived life largely. He took delivery of the 282-foot (86-meter) Nabila, christened in honor of his daughter, from Benetti in 1980. The yacht went on to further fame under the ownership of Donald Trump, as Trump Princess. She’s currently afloat as Kingdom 5KR.