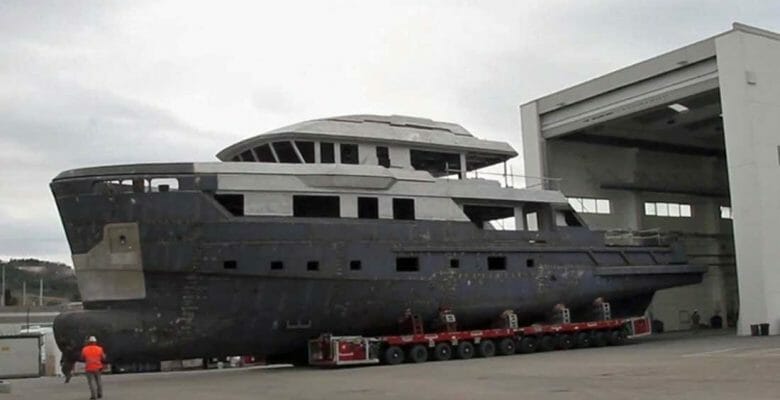 Cantiere delle Marche (CdM) is about a year away from delivering Aurelia 29, one of its largest custom yachts thus far. She is additionally significant for being the first of its Flexplorer line of expedition yachts, complementing the long-popular Darwin and Nauta Air lines.

The Flexplorer, a.k.a. CdM’s “Flexible Explorer,” concept was actually already on the shipyard’s mind prior to signing Aurelia 29. When those owners expressed what they wanted in their new yacht (they previous commissioned CdM’s Galego, a Darwin 102), the parties saw commonalities. In sum, the owners wanted a yacht that would be at home in popular Med destinations as she would in ice-laden waters. In other words, they wanted a durable adventure yacht that readily adapted to more typical luxurious living.

The 129-foot (39.37-meter) Flexplorer still has a ways to go before launch. Therefore, some of her most significant features aren’t yet visible in the video. For flexibility in luxurious living, the megayacht has what CdM calls an Infinity Deck. Fold-down bulwarks aft on the main deck literally and figuratively open up the possibilities for using the area at anchor. Along those same lines, once Aurelia 29’s 28-foot (8.5-meter) tender goes in the water, more deck space opens up. Altogether, the yacht has 1,238 square feet (115 meters) back here to arrange as the owners please, day or night.

The Flexplorer will welcome an owner’s party of 10 to 12 on voyages. One of the five staterooms has Pullman berths to accommodate the higher guest total. Finally, for true adventures, the Flexplorer should see a 5,000-nautical-mile range at 8.5 knots, with twin Caterpillars.