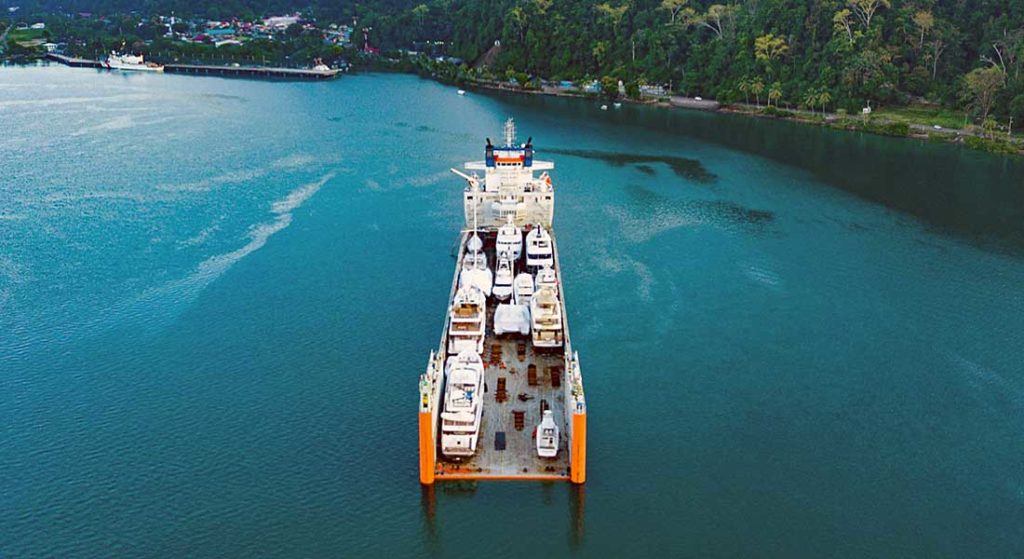 Five days after listing dramatically with megayachts onboard due to a ballast problem, the transport ship Super Servant 4 left Spain to conclude the rest of her planned journey. DYT Yacht Transport, which operates the vessel, indicates that some yachts suffered damage during the incident. However, none reportedly was severe. Additionally, the company asserts it has measures in place to prevent similar problems from occurring.

The ballasting issue occurred on June 8. While the semi-submersible vessel was offloading yachts in Palma de Mallorca, an electrical failure occurred. According to DYT Yacht Transport, this electrical problem led to “a limited amount of ballast water” transferring from port to starboard. Additional electrical issues occurred, too, which the company says were minor. Regardless, it does say that the combination of problems led Super Servant 4 to list heavily to starboard.

Local authorities, tugboats, and the ship’s own crew coordinated efforts to stabilize her. DYT Yacht Transport adds that Super Servant 4’s captain further ensured the crews of yachts onboard the ship safely departed the vessel. Upon rectifying the electrical failure, the company continues, listing subsided, and the yachts remaining onboard could float off. (Since Super Servant 4 can submerge her main deck area, she offers float-on, float-off transfers.) Following this, investigators inspected the ship, as well as the yachts, for potential damage.

In a statement it released today, DYT Yacht Transport says the vessel resumed normal operations on June 13. Authorities both inspected the ship and conducted several tests with the crew first. After that, Super Servant 4 received clearance to take on yachts bound for Genoa. Following Genoa, she will head back across the Atlantic to Florida, as initially scheduled. The statement goes on to say the following:

Thanks to the quick response by all parties involved, there were no injuries, no marine pollution and the damages to Super Servant 4 were minimal. There were minor damages reported to the yachts on board, all of which are currently in the process of being handled by the Marine Cargo Insurance in place.

We regret this incident took place, for our clients and concerned bystanders. Our sincere apologies for any inconvenience to the parties involved, especially our valued customers. DYT Yacht Transport will continue to learn from this incident and work towards delivering an improved version of the level of service our clients have come to expect.