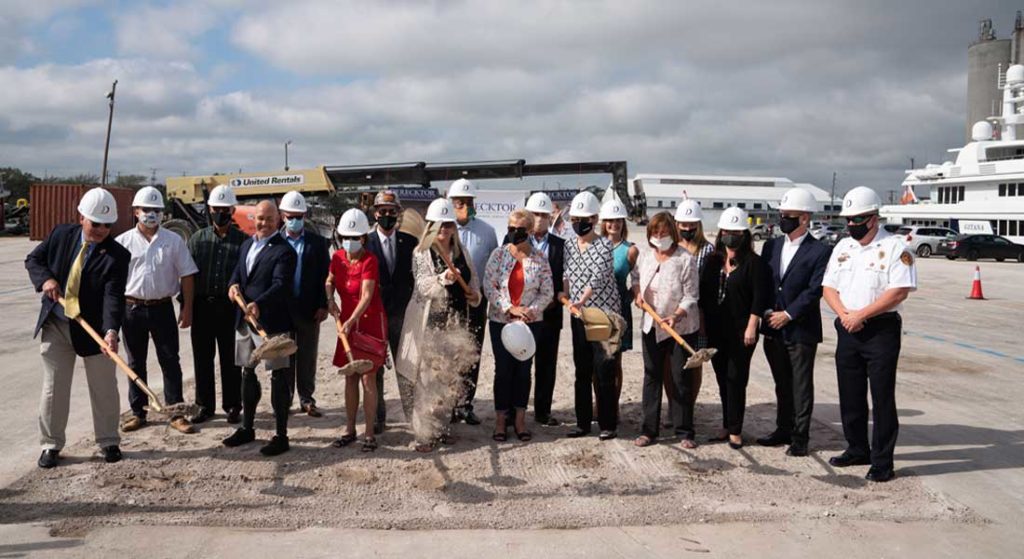 Federal, state, and local officials joined Derecktor staff on November 13 for the Derecktor Ft. Pierce groundbreaking. The long-awaited ceremony comes shortly after receiving permits to transform the former commercial Port of Fort Pierce in Florida into a refit and service yard. The yard will handle some of the world’s largest sailing and power yachts.

Derecktor management and St. Lucie County officials signed a contract for the site in April 2019. Some yachts already checked in since then for minor service. However, the major plans, including creating a haul-out basin, required review from more than one federal agency. Additionally, county and city officials needed to sign off on them. While formal approval was anticipated several months ago, delays, including the pandemic, interfered. Authorization finally came last month from the U.S. Army Corps of Engineers, the U.S. Fish and Wildlife Service, the Florida Department of Environmental Protection, the St. Lucie County Board of County Commissioners, and the City of Fort Pierce.

This clears the way for creating a new haul-out basin by excavating an area measuring 220 feet by 50 feet (67 meters by 15 meters). The excavation is within an existing, and ageing, concrete wharf. Intended for megayachts up to about 250 feet (76 meters), including sailing superyachts, the slipway will enlist the help of the world’s largest mobile boat lift. With a 1,500-ton capacity, it, too, is delayed due to the pandemic, arriving in early December. Overall, from start to finish, the slipway should take about five months.

Other infrastructure work can now start, too. Repairing existing bulkheads, for example, and transforming the ageing Indian River Terminal into workshops are top priorities.

U.S. Representative Brian Mast was among those using a golden shovel during the Derecktor Ft. Pierce groundbreaking. “This will be one of those places that people will be looking at worldwide to get their repairs, their work, their upgrade done,” he says. “That’s an incredible thing to say about what this is going to do for this community.”

This is the fourth Derecktor Shipyards facility along the U.S. East Coast. “I pledge to you that Fort Pierce stands ready to cooperate in making this and the whole port area successful,” says Linda Hudson, the city’s mayor.