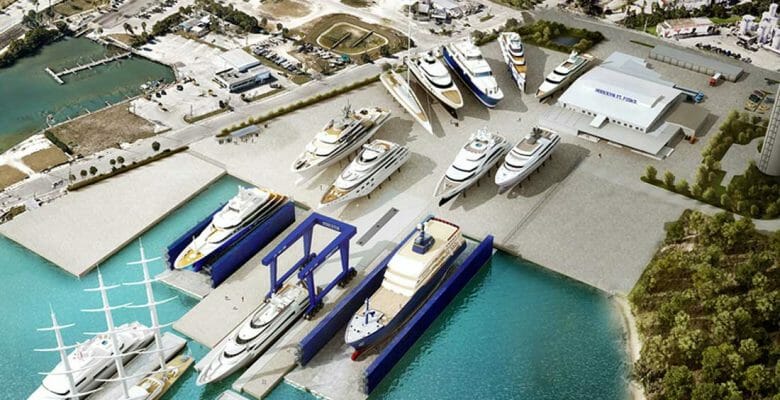 In yachting, people often talk about the world’s largest yachts. But the world’s largest boat lift? While it may seem strange, it holds a lot of significance. The largest-capacity mobile boat hoist is coming to the Derecktor Ft. Pierce refit yard. It will enable the new service center to haul yachts as large as 250 feet (about 76 meters), depending on their displacement.

The lift is in build right now in Italy, at a company called Cimolai Technology. Cimolai is one of a handful of often-sought suppliers for this type of specialized equipment. Capacity-wise, the machinery will be able to lift 1,500 tons when it goes into operation at Derecktor Ft. Pierce around the fall of 2020.

To put the world’s largest mobile boat hoist into further perspective, consider some statistics. “At 85 feet in height, it will be nearly as tall as the South Causeway,” shares Justin Beard, the marketing manager for Derecktor Ft. Pierce. (The South Causeway Bridge is a stone’s throw from the shipyard.) Documentation from Cimolai Technology additionally reveals that the upper outside overall width of the lift is 71 feet (21.6 meters). Plus, the distance between the blocks, which is some of the inner gear, is 48’3” (14.7 meters).

The world’s largest mobile boat hoist isn’t the only thing distinguishing Derecktor Ft. Pierce, however. Drydocks are also coming to the site, whose plans were finalized last April. In fact, both motoryachts and sailing superyachts will be able to use the drydocks, capable of accommodating yachts to 5,000 tons. A lack of overhead obstructions, as well as a maintained deep-water channel (28 feet/8 meters), means that a wide variety of the world’s largest yachts can head to the refit yard. The yard itself has a concrete apron stretching more than eight acres. It also has more than 1,000 linear feet (304.8 meters) of dockage.