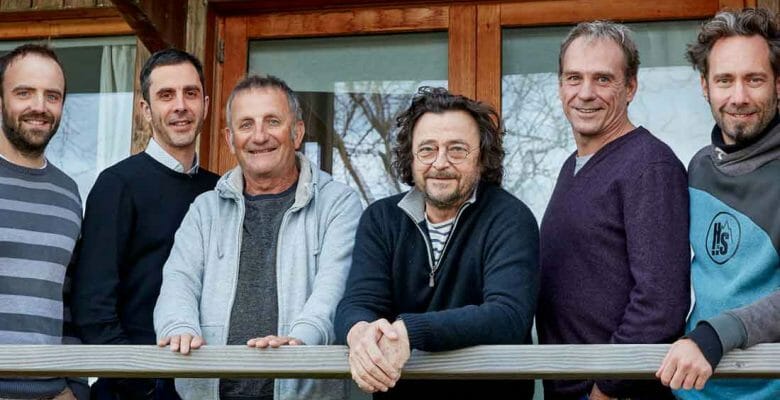 Nearly 40 years ago, two graduates of Southampton Solent University in the UK joined forces. They set up their own naval-architecture and design firm in France. The VPLP Design studio went on to gain international renown due to the talents of those graduates, namely Marc Van Peteghem and Vincent Lauriot Prévost (above, center). The duo has decided to step down from running the company, handing leadership over to a few capable hands.

Taking over in an executive-committee role are Simon Watin, Mathias Maurios, Quentin Lucet, and Xavier Guisnel (all also pictured). Each has been with VPLP Design for several years. Watin, for instance, came onboard in 2008, leaving in 2014 to join Artemis Racing, only to come back in 2020. He’s been the project lead for the studio, now stepping up into the president’s position. Maurios, meanwhile, has been a naval architect with the studio for the past 21 years. Lucet joined as a naval architect, too, in 2006, and Guisnel became an engineer with the team in 2013.

Van Peteghem and Prévost are not departing the firm just yet, however. “We shall remain at the side of the new managers so as to ensure continuity and a smooth handover,” they say in a statement. Watin particularly looks forward to their ongoing input and carrying on along the path they laid out. “VPLP Design is the very best of agencies and magnificently equipped for creativity and innovation,” he asserts.

From Pendennis’ Hemisphere to numerous other catamarans, from production boats to superyachts, VPLP Design has exhibited extraordinary know-how with multihulls. In fact, for 34 years, the studio has been responsible for the design of the Beneateau Group’s Lagoon and Excess range. All of this has occurred under the umbrella of VPLP’s Leisure Division. Additionally, the firm has designed numerous racing multihulls and monohulls under its Racing Division. Comanche, which saw construction at Hodgdon Yachts seven years ago, is certainly among the most famous of those. Finally, the studio’s Shipping Division has allowed the team to design more environmentally friendly commercial craft. Specifically, look for a winged cargo ship carrying components of the Ariane 6 launch vehicle, which heads into space in 2022.

“VPLP Design is our finest vessel,” Van Peteghem and Prévost say. “We pass on to our crew not only know-how and history, but also the values of listening, creativity, rigor, and caring.”