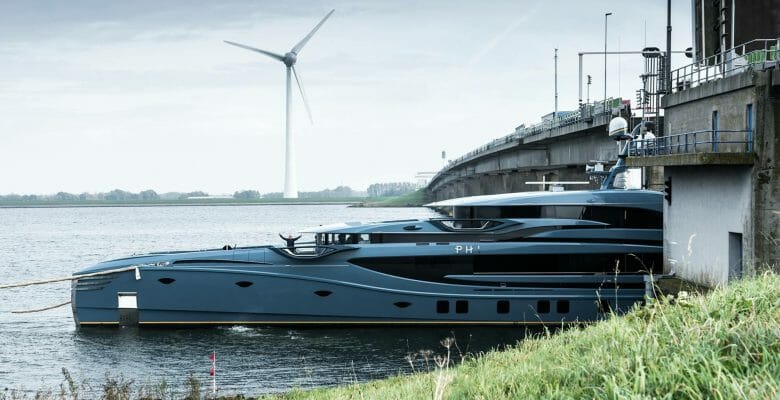 The strikingly different motoryacht Phi will be turning heads on the North Sea in the coming days. She departed Royal Huisman’s construction site in The Netherlands for its Amsterdam facility yesterday, in preparation for sea trials.

The 192-footer (58.5-meter) launched in July, bearing styling and general arrangement by Cor D. Rover. Additionally, she has the XL Fast Displacement Hull Form from Van Oossanen Naval Architects. Slim, it has less drag, which therefore means better fuel efficiency. It also allows her to remain below the 500-gross-ton mark, unusual for her LOA. Related to this, the motoryacht Phi is the longest sub-500-gross-ton yacht based on today’s classification rules. Simultaneously, the hull form allows more usable space out on deck as well as inside.

Just being a motoryacht makes Phi an unusual project for Royal Huisman, too. But, she is the first of what the shipyard intends will be more motoryachts. Specifically, in an exclusive interview with us last month, Royal Huisman’s CEO revealed, “We noticed there was a real need and demand from the market and from clients for a different kind of motoryacht.”

This all ties back to why the owner commissioned the motoryacht Phi in the first place. Rover, who has known this owner for years, says that the goal wasn’t just to build a big yacht. Certainly, it further wasn’t to build a big yacht on a set platform. “The owner of Phi wanted to build a yacht with a profound underlying story,” Rover explains. This story is the Golden Ratio, also sometimes called the principle of phi. It’s a formula of harmony and proportion in design. And, it runs through everything aboard this yacht, both inside and outside.

Expect sea trials to confirm a top speed of 22 knots. Finally, look for delivery to take place by the end of this year.