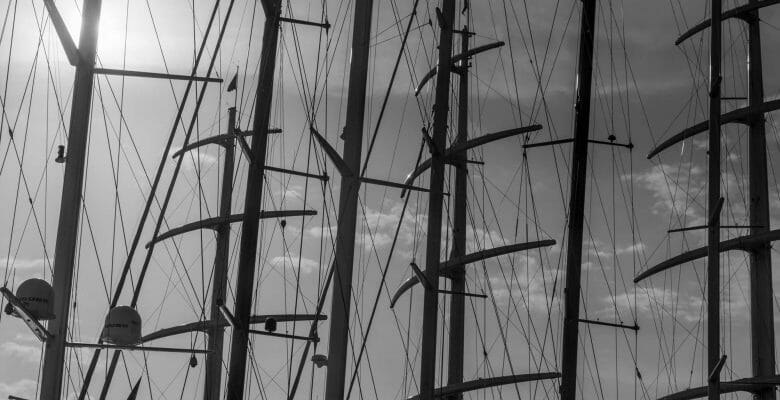 A bankruptcy court in Italy should hold a third Perini Navi auction by the end of the year. The word comes from the head of an Italian metalworkers union, whose members have worked at the dormant shipyard.

“Drop” refers to an expected drop in the required opening bid. La Stampa newspaper and other media outlets state the third Perini Navi auction should start at €50 million. The assets are the brand, the shipyards in La Spezia and Viareggio, land in Pisa, the Perini Navi USA office, 75 employees, and an unfinished sailing superyacht. That superyacht has long been rumored to belong to Larry Ellison, the head of Oracle and an avid sailor.

We reached out to the bankruptcy trustee, Franco Della Santa, for confirmation of the new bid. He did not respond by press time. Regardless, a lower price may not be the only good news for the interested bidders. Il Tirreno newspaper reports that liabilities have reduced. At a court hearing on October 8, the paper indicates, a judge accepted findings that creditor claims total about €93 million. These are down from more than €130 million.

If a third Perini Navi auction takes place by December, it will wrap up a tumultuous year for the storied superyacht company. In January, a court in Lucca declared the builder insolvent. This followed a judge rejecting a restructuring plan, plus a request from Perini Navi’s then-owners for more time to present alternate restructuring avenues. Court documents revealed that its debt exposure at the end of the first quarter of 2020 was nearly €100 million. The court further appointed a trustee to safeguard the assets under provisional operations.

Unfortunately, attempted auctions over the summer failed. These include an initial attempt in July and a second effort last month. Both times, no bidders submitted offers, despite expressing interest in the prior months. For the initial auction, the opening bid was €62.5 million. With the most recent auction, the opening bid was €53.5 million. But, ones within five percent of that were acceptable, too.

In each situation, the interested parties publicly criticized the opening bids. Those parties are Palumbo Superyachts, The Italian Sea Group, and a joint venture between the Ferretti Group and Sanlorenzo. Palumbo Superyachts, for instance, issued a statement in early July calling the price “undeniably high.” Shortly thereafter, the Italian Sea Group said that its financial consultants found “certain valuation elements indicating that it is not advisable for the Company to participate in the auction.” In September, Alberto Galassi, CEO of the Ferretti Group, said he personally believed the second auction price was still too high, and that too many questions lingered over the number of remaining employees, along with how to increase their numbers. Plus, he indicated it would be quite costly to restart operations, due to Perini Navi shutting down before the pandemic started.