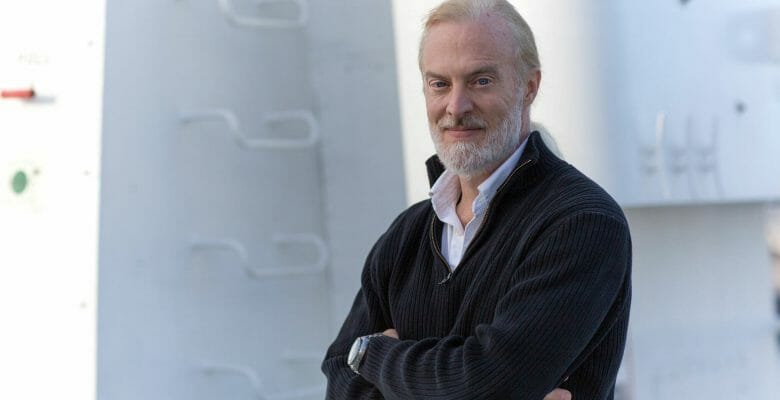 The International SeaKeepers Society annually recognizes individuals making significant contributions to ocean conservation and advocacy. Next month, it’s honoring retired U.S. Navy Commander Victor Vescovo as its SeaKeeper of the Year. He’s the first person to reach the deepest point in each of the Earth’s five oceans, a world record.

The SeaKeepers Award Event 2022, set for February 17 at Yacht Haven Grande Miami in Miami, will highlight just how extraordinary Vescovo’s accomplishments are. He descended the “Five Deeps,” as the points are known, aboard a custom-made Triton 36000/2 sub.

Specifically, Vescovo first ventured to the verified bottom of the Puerto Rico Trench in the Atlantic, 27,480 feet (8,376 meters) down, in December 2018. The next month saw him reach the South Sandwich Trench in the Southern Ocean, 24,388 feet (7,433.6 meters) deep. Vescovo crossed the Java Trench in the Indian Ocean off the list in March 2019. The depth: 23,596 feet (7,192 meters). Challenger Deep within the Mariana Trench in the Pacific came next, in April 2019. Significantly, filmmaker James Cameron visited the bottom of Challenger Deep in 2012, thanks to assistance from the late Paul Allen’s Octopus. However, Vescovo descended nearly 66 feet (20 meters) deeper, to 35,853 feet (10,928 meters). Finally, Vescovo descended in the Molly Deep in the Arctic in August 2019. That depth was approximately 18,209 feet (5,550 meters), 40 to 50 miles from an ice-pack edge too, adding to the danger.

Additionally, Vescovo furthered scientific knowledge with each expedition. For instance, he captured footage of previously unseen ocean life. Also, his sub’s sonar mapped the ocean floors. This provided clear answers on exactly how far down these oceans go and what lies on their bottoms. The Five Deeps trips took place with support from EYOS Expeditions, Triton Submarines, and others.

At the event honoring Vescovo, the International SeaKeepers Society further will feature expeditions from its Discovery Yacht program fleet. The owners of Discovery Yachts donate time onboard for scientists and researchers in different parts of the world, thereby aiding them in data collection. Finally, SeaKeepers is presenting its NextGen Award to the Blue Latitudes Foundation. This non-profit educates students, empowers women to pursue STEM careers, and launches projects to better understand and protect the oceans.