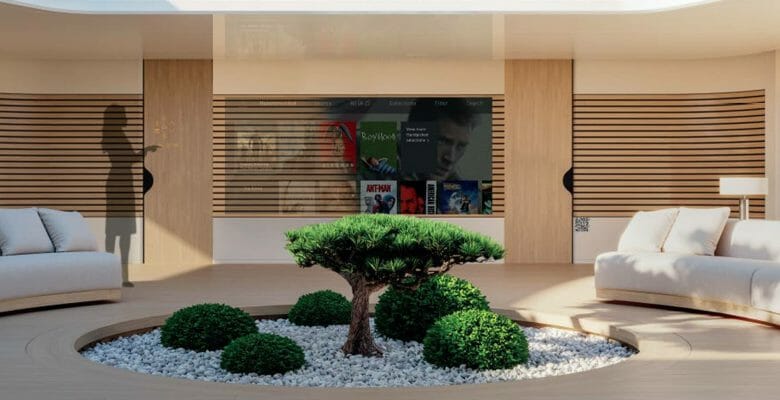 Integrating a variety of audio-visual technology aboard 10 to 20 superyacht projects each year means Van Berge Henegouwen (VBH) has a pretty good sense of what owners and guests want. Increasingly, people want not just intuitive music and video devices, but also ones without clunky components. (Remember the days of big, bulky TVs and a handful of remote controls cluttering up your coffee table?) That’s why the company is about to make a lot of cruisers happy. In a word, VBH’s Blended Screen, and a related control system called Magic-UI, is invisible when not in use. As in, actually invisible.

The VBH team began noticing over the past year that, while a lot of technological innovation is occurring, innovation alone isn’t enough for yacht owners. Similar to how shipyards and designers customize superyachts to their specific living and entertaining preferences, owners seek tech that conveys the sense of being tailor-made. Of course, first and foremost it needs to be intuitive. Equally important, they want tech that doesn’t stick out like a sore thumb.

VBH has new solutions as part of its aptly named Invisible Technology line. Notably, it created them with input from shipyards and yacht interior designers, too. Firstly, VHB’s Blended Screen solves the problem of a TV screen being just plain ugly in the opinion of a number of designers and owners. They’re giant black boxes—blotches, really, amid a highly designed ambience. Certainly, automatic sliding panels can hide them, but VBH says even its own sliding panels are just too noisy and slow. Furthermore, they require mechanical installations that impact space and structure. Blended Screen is a display that you see only when you want to—when it’s on. Otherwise, all you see is wood, stone, or other décor materials. Plus, it has a smaller footprint installation.

VBH’s Magic-UI, meanwhile, is a control panel that eliminates the need for remote controls and tablets. It integrates directly into furnishings—say, a wood table in the saloon. To that point, VBH says it works whether inside wood or natural stone. Just tap the surface, and icons for controlling lighting, volume, and more appear. A light touch on the icon is all it takes to effect the change you wish, and one more light touch on a power-button icon makes the display disappear.

Since tablets have become de rigeur aboard megayachts for audio, video, and even lighting control, why create something new? VBH points out that the control “buttons” can be quite small, and even the simplest functions require multiple clicks. Additionally, tablets and remotes tend to go missing the moment you’re ready to relax with some music or a movie.

VBH will be demonstrating each of its Invisible Technology solutions at its display at next week’s Monaco Yacht Show.  It’s further the sponsor of the show’s Yacht Design & Innovation Hub, where it’s hosting additional demos plus revealing more information on September 29.

Jeroen Van Den Hurk, CEO of VBH, says, “Going forward the two key pillars of every front-end solution will be ease of use and quality of integration. From now on, the best AVIT solutions can magically disappear when not in use and be instantly available upon demand.”