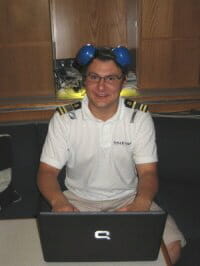 A crewmember from Charisma has been missing for more than a week in the British Virgin Islands, and local authorities are trying to piece together what happened.

Pawel Kwiatkowski – known as Pav, according to his bio – is the second engineer aboard the 153-foot charter yacht. According to newspapers in the BVIs, police state that he was reportedly last seen in a tender around 11:30 p.m. on January 29, leaving Willy T, the famed floating bar and restaurant off Norman Island. The police add that Kwiatkowski’s fellow crewmembers realized he was missing the following morning and contacted Virgin Islands Search and Rescue (VISAR). VISAR conducted searches on land and on water through February 2, along with marine police and a team from Blue Water Dive. Phil Aspinall, the president of VISAR, told the BVI Beacon that rescuers even looked in the waters of St. John. VISAR switched to recovery operations on the 3rd.

Aspinall also told the media that information from witnesses who had seen Kwiatkowski at the bar seemed distrustful. “Our enquiries made it all seem a bit suspicious, so we put in a call to the police,” he was quoted as saying. “It’s now a police matter.” The police confirmed the investigation and, as part of the overall investigation, have spoken with Kwiatkowski’s fellow crewmembers.

Police have not yet revealed if they have a suspect in mind or whether they believe they know what happened. Charisma is expected to remain in the area as the investigation continues.

We’ll post a follow up as more information becomes available. In the meantime, his friends have set up a Facebook page for him, open to all comments.

Our thoughts at this time go out to the family of Mr. Kwiatkowski, with whom YPI Management has been in daily contact throughout the last nine days — we will continue to do everything n our power to ensure his mother is properly supported and taken care of. We would also like to thank the captain and crew of M/Y Charisma who, notwithstanding the trauma of the last few days, have been willing and able to provide the maximum support and assistance not only to YPI Management but to the rescue services and police in the course of all our investigations.