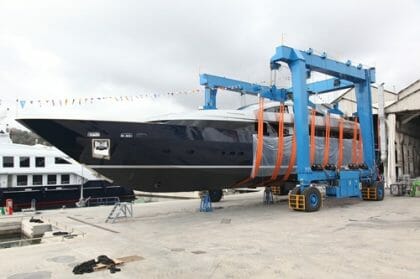 The global downturn seems to have claimed another yacht builder: Baglietto.

Several different news reports in local Italian newspapers stated last Friday that the yard succumbed to debt. Citta della Spezia reported that workers arrived at the La Spezia facility that morning but were unable to enter, as a liquidator had been appointed on Thursday and was to meet with loan holders to discuss the feasibility of financial restructuring. Another newspaper article stated that Baglietto’s second facility in Varazze was also shut down, and that despite Baglietto’s holding company presenting a restructuring plan to banks, the plan was rejected. Meanwhile, the newspaper Citta di Genova ran an article beneath the headline “Cantieri Baglietto: The bitter denouement of a Ligurian story.” It traced Baglietto’s long history, beginning with its founding in 1854. The article went on to relate Baglietto’s years of building racing yachts, and its eventual sole focus on megayachts beginning in 1987, with the first one being the 35-meter Adler.

None of the articles made mention of the projects that Baglietto anticipated delivering in the next few months. Earlier this month it launched its first Wide Body, the 42-meter (138-foot) Lucky Me, pictured above. Other yachts expected to hit the water this year included a 43-meter (141-foot) Displacement, 41-meter (135-foot) Semi-Displacement, and 46-meter (151-foot) Displacement.

I requested comment from Baglietto but did not receive a reply as of this writing. As developments occur, I will update accordingly.

UPDATE, MARCH 31: Baglietto still has not released a public statement, but more news reports out of Italy state that the shareholders of Gruppo Baglietto, the parent company for Baglietto and Pisa, have voted for voluntary liquidation of the company. The bank administrator overseeing the proceedings is now on Gruppo Baglietto’s board of directors and the CEO of both Baglietto and Pisa. Il Vostro Giornale newspaper reports that Group Baglietto released a statement explaining it will “continue negotiations in progress with the banks involved to verify the feasibility of operating capital and financial restructuring of the Company and the Group.” The “Company” is Camuzzi Group, which owns Gruppo Baglietto. The article reports that Camuzzi Group does wish to remain in the yacht business, given the financial investments it has made. However, the article continues, without the various banks which hold its debt approving its restructuring proposal, this may not be possible, and the company may go bankrupt. Camuzzi Group reportedly presented a four-year restructuring plan several months ago that did not receive unanimous approval.

Of particular note in the Il Vostro Giornale article is a statement that the Atlantis investment fund partners and Sanlorenzo are “estimating the situation” of Baglietto.