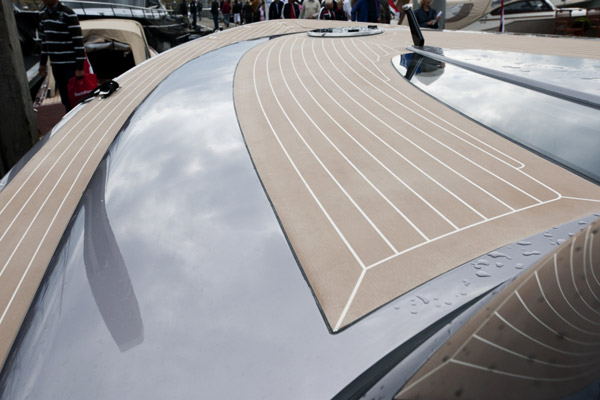 There’s a lot of talk about reducing carbon footprints these days, and for good reason. All arguments about global warming aside, it simply makes sense to be a better caretaker of the environment. It’s especially important if you’re passionate about the beauty of the outdoors.

With this in mind, we decided to take a look at a few eco-friendly options for megayachts. Rather than focus on fantasy, however, the items outlined here are existing products or proven approaches. With all due respect to the innovators and dreamers out there, some owners want to take steps now to start being better stewards. Regardless, this edition of The Superyacht 6 might just stir imaginations, leading to even better ways to tread softly upon the Big Blue Marble we call our home.

1. Esthec decking. Megayacht owners and production-boat builders alike have selected Esthec’s composite decking (above) over real teak. Why? As beautiful as teak is, we’re depleting the resource. Furthermore, pricing for high-quality teak has become far more expensive. While a handful of companies offer faux wood deck material, Esthec’s composite decking is so realistic-looking, you might not even know it isn’t teak. Designers like it for the variety of tones and textures it can take on, plus the fact that they can create all sorts of intricate patterns with it, which real wood grains don’t always allow.

2. Solar Sailor Solarsails. Solar Sailor’s Solarsails capture both sun and wind energy. They’re wing-like devices that have been installed aboard ferries for several years, automatically moving to best position themselves to take advantage of the most sun and best wind conditions. They were thrust into the superyacht spotlight thanks to the imagination of Alastair Callender. You may recall that he’s the young designer behind the super-green superyacht Soliloquy. In conceiving his concept project, he reached out to Solar Sailor for permission to feature its solar energy panels as an integral part of the design. Not only did the company say yes, but it offered its team of designers and engineers to assist in determining what size and shape of Solarsails would best suit the design. 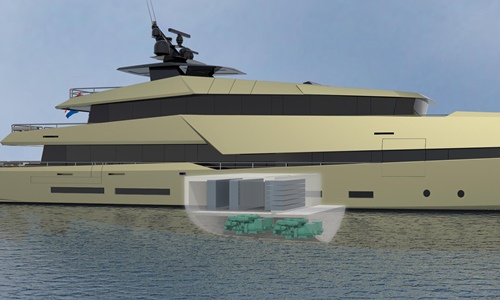 3. Hybrid propulsion. A few yacht builders and designers have been exploring this option. Mochi Craft became the first semicustom yacht builder to offer a series-produced megayacht, the Mochi Craft Long Range 23, with a diesel-electric hybrid drive system. The system has a zero-emission mode in which the yacht runs purely off lithium-ion battery banks turning electric drive motors. A similar no-emission mode allows running the hotel load off the batteries: no genset needed. In development, Ghost Yachts’ G180H (above) will be the first hybrid superyacht in the 50-meter-plus (164-foot-plus) range and exceeding 500 gross tons. “It’s a full hybrid that adjust the power demand to a specific situation,” Ghost Yachts’ founder and managing director Björn Moonen says. In what he calls “whisper speed mode,” the G180H will rely solely on battery power, ideal for in-port maneuvering. In cruising mode, the yacht will operate on hybrid power, while at anchor she can rely on either batteries or hybrid power, with the latter recharging her batteries. Dynamic positioning can also draw power from either the battery bank alone or hybrid mode, depending on water conditions. Regardless, Moonen says, “The G180H is also capable of running the entire hotel load through the night, which results in an extremely silent yacht.”

4. Solar panels. Considering hard-core sailing enthusiasts have been using solar panels for years, it’s about time the megayacht market got in on the act. Also known as photovoltaics, these panels can do everything from charge your batteries to power the air conditioning and other components of the hotel load. For marine usage, they’re typically protected by a tempered glass coating, yet still remain thin. The designers at Vripack have even employed it for the Frisian Solar Challenge, a competition considered the World Cup for solar-powered craft. In the last race, in 2010, Vripack designed and built a 6-meter (about 20-foot) solar boat driven by electric power from just five solar panels, capable of 11 knots. Perhaps this will encourage solar-powered tenders, or larger craft. Wally is certainly thinking large, with its WHY program. The WHY yachts (pictured below) are actively being shopped around for construction, featuring photovoltaic panels on the flat roof of the superstructure. Further, they pivot much like Venetian blinds. 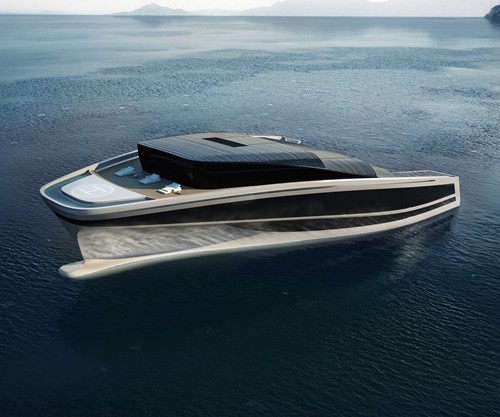 5. Skysails. As strange as it sounds, a giant sail extending like a parachute off the side of a vessel is fact, not fiction. Skysails has been working with cargo ships for several years, fitting them with what’s called towing kites. Automatically deployed and retrieved, they’re similar in shape to a paraglider and made of high-strength and weatherproof textiles. Furthermore, they operate between 100 and 300 meters (328 and 984 feet) above the vessel. Megayacht designers such as Humphreys Designs and Van Peteghem Lauriot Prévost Yacht Design have created proposals in recent years featuring SkySails’ towing kites. Perhaps an unusually minded owner will come forward after learning this: Tank tests have reportedly revealed that fuel consumption can be reduced up to 30 percent. Then imagine the towing kite featuring colorful designs and logos akin to what traditional sailing yachts do, and the fun begins.

6. Carbon offsets. While not technology per se, carbon offset programs help owners determine offsets for everything fuel consumption to the energy consumed in constructing their yacht. But how do you know you’re really contributing to re-forestation and other worthy programs? That’s where the company Yacht Carbon Offset comes in. It has strict criteria in selecting projects, making sure the actions are traceable and the carbon-dioxide emissions reductions are measurable. Yacht Carbon offset is working with individual owners as well as organizations like the Mediterranean Yacht Brokers Association (MYBA) and the Dubois Cup.