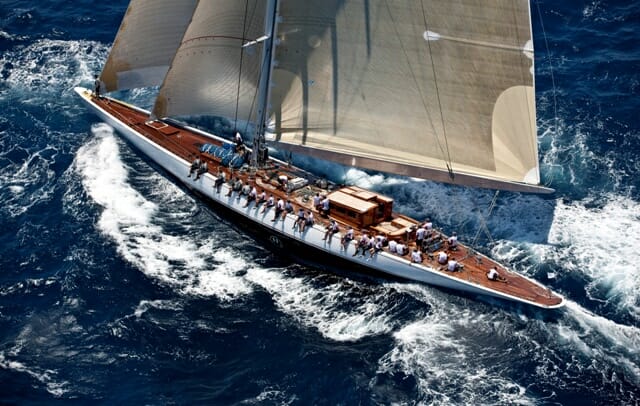 If it weren’t for the intense competition of the America’s Cup in the early 20th century, we may never have seen the J Class yachts come to fruition. In fact, in 1929, Sir Thomas Lipton, an avid racing yachtsman (and the importer of what became Lipton tea, from India), commissioned what became the very first J. From 1930 to 1937, an incredible number of other Js were commissioned by additional owners, with just 10 becoming reality.

In this edition of The Superyacht 6, we take a look at the three original Js that are still around, plus three exact replicas that launched in recent years. (More are under contract and/or construction, but not yet in the water.) All are members of the J Class Association, formed to promote and protect this historic class of yachts.

1. Shamrock V. Measuring 118 feet and painted green (naturally), Shamrock V is among the three remaining original Js. She’s also the only one with a wood hull. She was built in 1930 for Lipton, from England’s Camper & Nicholsons, for his fifth America’s Cup bid.

Under subsequent owners throughout the 1930s, including Sir T.O.M. Sopwith, Shamrock V raced well, but couldn’t beat tough competition. Her racing days ended with the world wars, so she cruised throughout the years into the 1960s. She was nearly scrapped in 1962, but an Italian yachtsman named Piero Scanu bought her and took her to Camper & Nicholsons for a complete rebuild. The Lipton Tea Company acquired her from Scanu in 1986, donating her to Newport’s Museum of Yachting. Three years later Elizabeth Meyer, the famed American yachtswoman and classic yacht restorer, oversaw another refit. By 1995, the yacht was part of the collection of Newport’s International Yacht Restoration School, then sold in 1998 to a private owner. Ever since then, Shamrock V has cruised and chartered on both sides of the Atlantic. Of course, she’s also raced, famously competing against Endeavour (see below) on the old America’s Cup course in Newport in August 1989.

2. Velsheda. Velsheda is also an original J Class yacht, a 129-footer designed by Charles Nicholson and built by Camper & Nicholsons. This steel-hulled yacht was delivered in 1933. W.L. Stephenson, the owner of the Woolworth five-and-dime store chain, used letters from his daughters’ names (Velma, Sheila, and Daphne) to christen her.

Velsheda won more than 40 races in her second year. She was also state of the art, fitted with all-aluminum masts, winches for handling sails, and sails made of Terylene (known today as Dacron). Sadly, Velsheda ended up entrenched in the mud in England in 1937, unable to move. The yacht remained there for decades, deteriorating. In 1984, a scrap-metal merchant named Terry Brabant had her hauled and restored.

Another restoration in the mid-1990s saw the addition of modern features. Among them: the world’s tallest single-piece carbon fiber mast, towering 165 feet high. Velsheda went on to win the Antigua Classic Regatta in 1998, among others. In addition, every year since 2002, she’s competed in the Maxi Yacht Rolex Cup, the Voiles de St. Tropez, and the Antigua Classic Yacht Regatta.

3. Endeavour. The third of the remaining original Js, Endeavour measures 130 feet. Her original owner was Sir T.O.M. Sopwith, a British yachtsman who commissioned a few same-named yachts. This one was built for the 1934 America’s Cup race, at the yard of Camper & Nicholson in England. Sopwith was fixated on beating the competition, including Shamrock V, in races leading up to the Cup, and he succeeded. Unfortunately, Endeavour did not ultimately win the Cup, despite securing first place in race after race prior to it.

Endeavour also unfortunately fell on hard times. She stopped racing in 1938 due to the war, and she changed hands subsequently a few times. In 1947 she was sold again, to be scrapped, but saved literally hours before crushing was to begin. Two sinkings, one in the 1970s and one in the 1980s, seemed to spell her ultimate doom. She was in particularly bad shape during the second sinking: rusted, lacking a rudder and interior. Despite this, she was acquired in 1984 and underwent a rigorous restoration over the next five years in England and Holland. Thanks to this effort, she’s still sailing today, competing in races and entertaining charter guests.

Endeavour also ushered in a few technological advances. She was the first to employ the quadrilateral genoa, a two-clewed headsail. This permits tremendous sail area and, of course, power. It’s still used today, in fact. 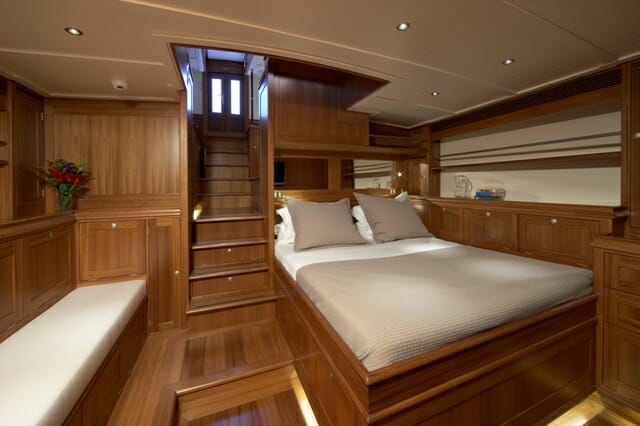 4. Ranger. Measuring 136’4″, Ranger (pictured at top) is a replica of one of the most famous American-built J Class yachts, also named Ranger. The original Ranger was commissioned by Harold Vanderbilt, the renowned railroad executive and champion yachtsman. Launched by Bath Ironworks in Maine in 1937, she won four of six races in the 1937 America’s Cup. She was also the fastest of all the American-built Js.

Construction on the new Ranger started in 2002 at Danish Yachts in Denmark, finishing in late December 2003. The original lines, by Sparkman & Stephens, were followed, though Ranger does also have a central cockpit and doghouse, the latter made of carbon fiber. She wasted no time after delivery to enter a race. The St. Barths Bucket in early 2004 was her first, followed by the Antigua Classic Yacht Regatta later that same year. In fact, Ranger raced against Velsheda in Antigua, coming away with a second in class. Since that time, Ranger has faced Velsheda a few more times, with the crews enjoying a friendly rivalry.

5. Hanuman. Hanuman is a replica of Endeavour II, which was commissioned by Sopwith in 1937. She’s owned by Jim Clark, the founder of Netscape and an avid yachtsman. Having a successful relationship with Royal Huisman on two previous sailing yachts, Clark tapped the yard to build the 135-footer.

Hanuman was designed by the naval-architecture firm Dykstra & Partners to perform much like Endeavour II did, though using modern-day materials like Alustar aluminum and carbon fiber, both valued for their light weight and strength. Since delivery in 2009, Hanuman has raced around the world. She’s also entertained Clark and guests for traditional cruises. The interior is fashioned 1930s-style, naturally in honor of her classic exterior lines.

6. Lionheart. Lionheart is the longest J Class afloat, at 142 feet. It’s interesting to note that she’s a replica of a J design that didn’t end up being built, Ranger F. (The “F” designates her position as being one of a few Ranger designs commissioned.) The owner of Lionheart chose it based on the advice of Andre Hoek, the founder of Hoek Design. He wanted a powerful performer, and after analyzing both never-built and existing Js, Hoek and his staff determined Ranger F best suited the owner’s needs.

Built by Claasen Jachtbouw in 2010, Lionheart does have modern advancements. These include a below-decks furler for the headsail, and carbon fiber spars. She also has modern comforts such as air conditioning, since she charters. Guests can enjoy a center cockpit while the owner (or chief charterer) enjoys the aft cockpit, connected to the owner’s suite (pictured above). In contrast to Hanuman, Lionheart has a simple interior, where warm-toned teak takes center stage.