Megayacht builders are increasingly catching on to a concept widely applied in other luxury markets: Align yourself with a major lifestyle or sporting event. To that end, Admiral Tecnomar Group used the Monaco Grand Prix as the backdrop to the unveiling of two new megayacht series.

Presented at the race with International Yacht Collection, which will also promote at least one of the series, the new megayacht lines are known as X Lence and C Force. 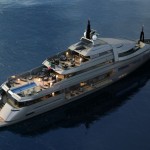 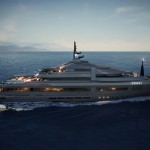 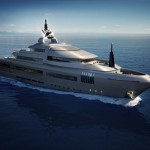 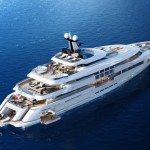 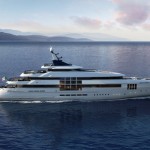 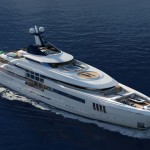 Admiral Tecnomar Group created X Lence with Uniellè Yacht Design to emphasize far-flung explorations. Of equal importance: abundant room for relaxation. That’s why each X Lence megayacht features lengthy balconies, a variety of shaded and open alfresco areas, and more. Accommodations inside depend on the ultimate LOA selected. X Lence includes three LOAs: 147’6” (45 meters), 187 feet (57 meters), and 213’3” (65 meters). Regardless, each of these megayacht models could easily accommodate an owner’s party of 10 or more.

C Force, meanwhile, incorporates more traditional megayacht looks, also developed with Uniellè Yacht Design. The same LOAs as the X Lence line are being offered, with an additional 246-foot (75-meter) model. C Force megayachts will also be capable of ocean-going travel, though as the images reveal, they especially emphasize lightness and brightness. Take a close look at the stacks of windows that span three decks, and you’ll immediately see why. Glass-lined passageways are incorporated inside as well. Of course, owners and guests will have traditional creature comforts, too, such as a beach club. Partitions aft and to each side of the transom will all fold down to create it.