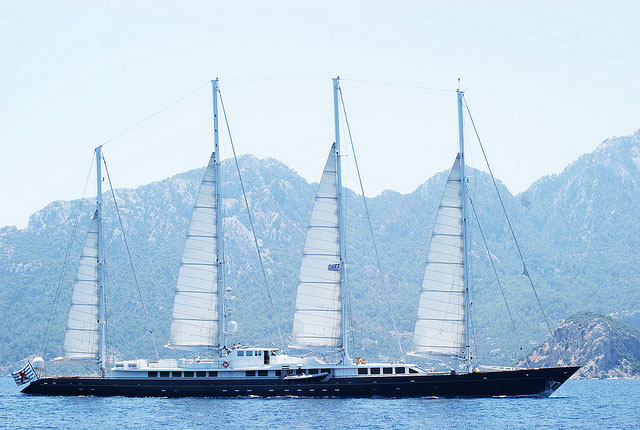 Phocea was boarded in Vanuatu earlier this month by local police, and at least two of four people initially arrested are still being held. Police state they suspect the megayacht of being involved in gun smuggling, money laundering, and breaching maritime borders.

Police have confirmed to local media that customs, immigration, and quarantine officers were involved in the boarding operation, which took place on July 22. The 246’6” (75.15-meter) Phocea was in Port Vila Harbour but not at the dock, and while she remains in their custody, she was not taken to the dock by officials. Two men, a woman, and Phocea’s captain were, however, taken off the yacht, under arrest.

The acting police commissioner initially told local media that the alleged crimes were connected to a cabinet minister and other local political leaders. However, he did not provide names nor any other details. Later, the Vanuatu Police Media Unit provided the information about the high-powered arms, money laundering, and breaching maritime borders. The same unit issued a statement: “A court warrant was issued and a search was conducted and numerous documents in relation to bilateral arrangement and the forging of signatures on official documents were confiscated. On board the yacht were 16 crew members including the captain and a Samoan and Tongan, who were involved in a Vanuatu citizenship controversy in March.” The police added that individuals aboard Phocea were arrested in Thailand earlier this year for arms smuggling, though they were not identified.

The captain of Phocea, the Samoan and Tongan, and the unidentified woman appeared in court last week. According to an article published yesterday in the French newspaper Le Figaro, the captain was released on bail, and two others were indicted on a number of charges. The paper reports that those individuals are the same ones tied to the arms-smuggling case in Thailand. As for the Vanuatu charges, they include arms trafficking, forgery, and issuing forged documents, along with other immigration-law violations.

Phocea’s owner has ties to Vanuatu. He’s Anh Quan Saken, a Thai native who became a Vanuatu citizen earlier this year. Police say the megayacht was registered in Vanuatu in 2005 as a diplomatic yacht belonging to him. Recently, he had been nominated as the honorary consul of Vanuatu in Vietnam. He has not been confirmed for the post, however.

The situation surrounding Phocea is stirring up political controversy, too. The head of Vanuatu’s opposition is calling for the prime minister to resign, since he has not commented on the case nor the alleged involvement of members of his government. The opposition leader also cites a few reports that state two ministers were aboard Phocea prior to the search, and questions why neither the police nor the prime minister will comment. Radio New Zealand International also reports that the head of the transnational crime unit was suspended last week over the information blackout concerning the megayacht.

UPDATE, AUGUST 1, 2012: Police searched Phocea again on Monday, according to the Vanuatu Daily Post newspaper, discovering a substance in a plastic bag that will be tested to determine if it is an illegal drug. In further developments, Richard Kaltongga, adviser to the Vanuatu prime minister, says that Phocea is being detained, and clarified some of the details surrounding the case to ABC Radio Australia. “The vessel is still being detained by the police and the security services, and they’re still going through the vessel,” Kaltongga says. “There were a lot of irregularities associated with the vessel, which would suggest that they may have contravened several laws and some of our legislation. We are informed that the papers that were presented to customs and immigration people may have been false. The prime minister had no knowledge of the vessel and its impending arrival. He was not aware despite the fact that there were some comments—we’ve heard of some comments—made that the prime minister was invited onboard. The prime minister was never invited onboard, and he reissued instruction that he would not go onboard this vessel. Also, we asked the police to commence investigation into the allegations surrounding the vessel. We are aware that a couple of ministers may have been involved and some backbenchers who, I’m not sure which side, whether they were the Opposition or the government side. The prime minister did call the foreign minister in and met with him yesterday, seeking investigations. I’m aware under the powers to make diplomatic appointments, the prime minister has requested that this be transferred directly to the control of the prime minister, because some of the issues may have been involved with the whole fiasco surrounding this vessel.”

In addition, the Tongan and Samoan nationals arrested have been identified as Hiva Matiujaje and Michel Gangatadlakepa. They appeared before the Magistrate’s Court and were charged with obtaining Vanuatu citizenship by false and misleading statements. The Vanuatu Daily Post identified them as crewmembers, though the paper did not cite its source, and other news media did not identify them as such. Regardless, both men pleaded not guilty and will reappear for trail later this month. Police still reportedly refuse to discuss anything further about Phocea.

UPDATE, AUGUST 20, 2012: Radio New Zealand reports that 13 crewmembers of Phocea have pleaded guilty to breaching the customs and immigration laws of Vanuatu. The media outlet states that they each were required to pay fines equivalent to nearly US$1,100, for disembarking Phocea before immigration clearance was granted. Radio New Zealand also reports that their passports were given back to them, having been taken when police raided the yacht on July 22. Capt. Richard Malaise and a woman identified as Faviola Brugger Dadis face further charges this week. Brugger Dadis, an American who was arrested during the initial raid, has already been fined about US$1,500 for departing the yacht without having immigration clearance and for obstructing the police, customs, and quarantine officials when the raid took place. Radio New Zealand states that she is believed to be a partner of Anh Quan Saken.

UPDATE, NOVEMBER 15, 2012: Two charges were dropped against the captain, as the prosecution determined he did not sign a false declaration given to customs and immigration. However, he did plead guilty to illegally dropping anchor at Paradise Cove, an unauthorized port of entry. He also was found guilty of failing to report the yacht’s arrival to customs. Two caretaker cabinet ministers, Alfred Carlot and Marcelino Pepite, were charged last month with illegally boarding the yacht. They have pleaded not guilty and will likely go to trial next April.