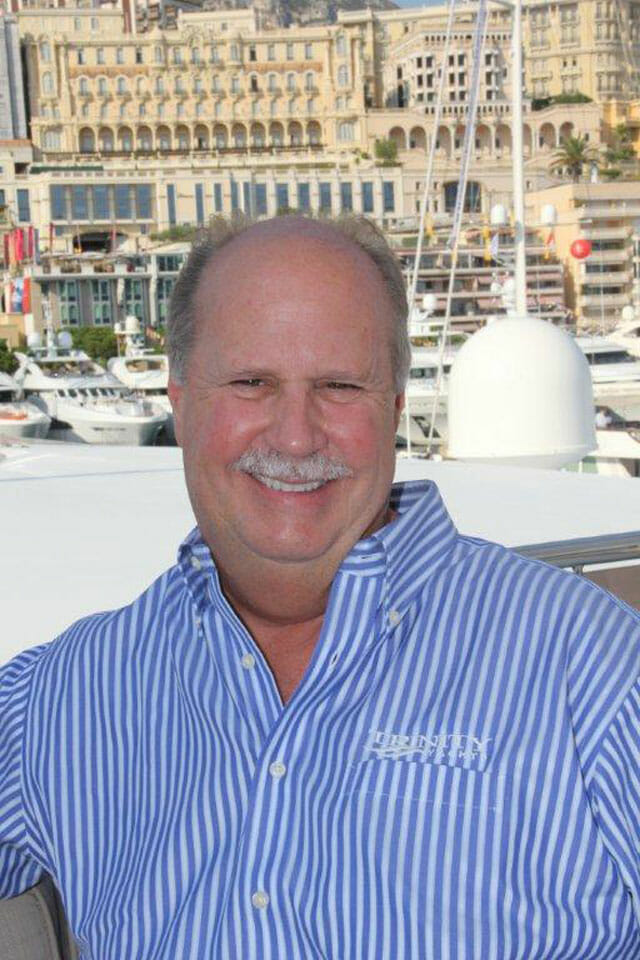 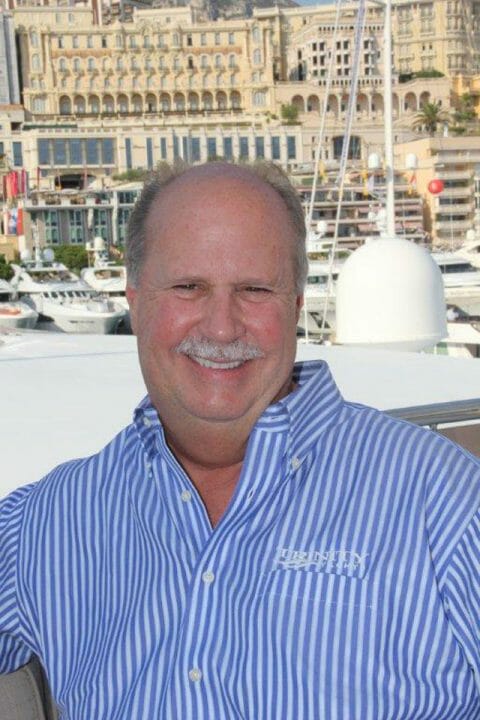 It makes sense that Billy Smith and John Dane, who raced sailboats together as kids, lead one of North America’s most highly regarded shipyards, Trinity Yachts. Smith’s family owned several successful marine businesses in New Orleans. His father was an avid sportfisherman and co-founder of the Louisiana Sportfishing Club. Smith divided his early summers between sailing in the Southern Yacht Club fleet, often against Dane, and fishing in the Gulf of Mexico.

Trinity Yachts was established in the 1980s, to increase capacity at Halter Marine in New Orleans. Halter was a major player in commercial shipbuilding. Trinity launched its first motoryacht, the 97-foot Leda (now 115-foot Watercolors) in 1990. Smith says it took a decade for the yacht business to be “reasonably” profitable.

Here, Billy Smith discusses Trinity Yachts’ reliance on diversification and how it competes on a global stage. If you’ve ever spoken with him, you’ll recognize his no-mincing-words style.

Megayacht News: What are the largest differences you see in megayacht clients today versus the early days in Trinity’s history?

Billy Smith: When we first started, the people who contacted us were looking for an absolute deal. They were bargain-hunters who didn’t know the name Trinity, so they figured they could get a steal. Now that we have a good reputation and pedigree, our clients are much more experienced. Many come back time and again to build boats. One has built six with us, and another two have built four—one of them is building a 193-footer right now—and many others are repeat customers. Obviously, when you get to this level of trust, it makes the build process much more enjoyable for the client.

Megayacht News: Does the fact that Trinity Yachts is a custom builder limit business?

Billy Smith: We don’t build on spec, so that probably eliminates about 85 percent of the potential buyers. There are a number of reasons why people don’t pursue (custom) construction. Building a yacht is a difficult process, and it takes a certain type of individual to follow through with it. It’s interesting that of the 60-odd yachts we’ve built, only four clients had inherited money. The rest are self-made. There are hedge-fund guys, mega-car dealers, real estate developers, turkey farmers, pig farmers, lawyers, and owners of grocery stores. They come from all walks of life. Fascinating. The only common thread is that they made their own money.

Megayacht News: How did you get started in the business?

Billy Smith: John (Dane) and I started researching the yacht business in the late 1980s as a potential market. Frankly, we were stunned by what we found. None of the large yachts built in the U.S. had any classifications. John and I had grown up around yachts and sportfishing boats. We’d done ocean races. We were already building seagoing commercial vessels. We wanted to build yachts to ABS and other advanced features.

So we started to build Leda in 1988, with Paola Smith as the interior designer. We included features like a state-of-the-art acoustics package, fresh-air recirculation system, and many other components that couldn’t be found in the yachting sector.

After the launch, we got almost no recognition. We just didn’t have a name or pedigree. John and I thought yachting was an objective market, like the commercial and military segments. We figured if we built a better mousetrap, the market would respond. It didn’t, at least not right away.

Megayacht News: What do you mean by “objective?”

Billy Smith: The commercial and military buyers look at the specs. For patrol boats, it’s how fast the boat goes. For oil and gas, it’s range and how many tons of cargo it can carry. For tugs, it’s horsepower. You look at these boats objectively, and if you match the price and specs and decide that it represents good value, the boat will sell. If you build a better mousetrap, the market responds with orders.

Yachting, on the other hand, is very subjective. If an interior is too dark, a client might not be interested. Or they might think the styling is too contemporary, or too traditional. That’s without taking into consideration build quality. The resale market can be even more subjective.

We really didn’t understand that at first. But we kept banging away at the yacht market, and within 10 years, we had gotten boats out there. We established our pedigree.

Megayacht News: What advantages do American builders like Trinity have over your European, Asian, or New Zealand competitors?

Billy Smith: The first thing that comes to mind is the legal system. Do you want to be a rich American in a Turkish or Italian court of law? Most of our clients are much more comfortable with the U.S. judicial system, and not having to deal with foreign laws. There’s also the ease of visiting the shipyard. And, of course, the exchange rate is a factor. When you get into the upper echelons and compare us to the Northern European shipyards, we’re significantly less money but still provide very good build quality. If you compare us to Taiwan or Turkey, it’s apples and oranges. I tell prospective clients that if they’re shopping solely on price, then we’re not the yard for them.

Megayacht News: Do any technologies from the military and commercial sectors hold promise for yachting?

Billy Smith: For displacement yachts over 200 feet, diesel-electric propulsion is viable. The gensets are silent and meet tier 4 environmental regulations. We have used some of the sound-damping techniques from our oil and gas vessels in yachts to good effect. We’re also working with new UV lights in the air-conditioning system. It kills mold spores. All of our commercial boats, and now our yachts, have fresh-air makeup systems that dehumidify and treat air entering the boat, so the entire air supply is circulated six times every hour.

I could also see a variation on dynamic positioning for a yacht owner who wants to hover over a coral reef or in a fjord. We’d have to tone it down and call it “electronic anchoring” or something like that. “Dynamic positioning” means ABS and the Coast Guard would have to be involved in certification.

We’ve also seen advances in bottom paint. All our military boats have non-toxic bottom paint that lasts five years. It’s a slippery paint that has anti-fouling properties. By moving through the water, most growth just slides off. That could become a big part of the yachting market for any boat that typically stays in warm water.

We’re also the first yard in the U.S. building a ship that runs on both diesel and LPG (liquefied petroleum gas). It doesn’t just carry the gas, but runs on it. That could potentially be applied to a yacht at some point.