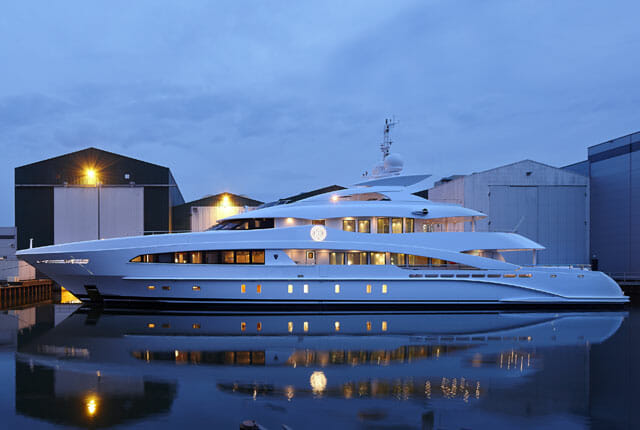 Monaco Wolf is the fourth delivery in the 50M Semi-Displacement family by Heesen Yachts. She also marks the third collaboration between Francesco Paszkowski Design and the shipyard. Sold just three months before completion to her owners, Monaco Wolf still has plentiful personalized touches throughout her decks.

The all-aluminum megayacht, measuring 163’4” (49.8 meters), is meant as much for people as she is for pets. In fact, the owners of Monaco Wolf cruise with their dogs. Babies are in the family, too. Gates keep both the dogs and the diaper set safely on deck. One of the five guest staterooms is the babies’ room, complete with cribs. Margherita Casprini, an interior designer who often collaborates with Francesco Paszkowski Design, ensured the cribs could convert as the babies grow. The bases of the cribs are truly traditional berths, fitted with removable rails.

The stateroom (one of five guest cabins aboard) isn’t the only place dedicated to the tiny tots. The skylounge aboard Monaco Wolf is arranged as an informal family and play area. Of course, the dogs are welcome, too: They even get a doggie bed in which to relax. Soothing tones in this room, as elsewhere, make for an inviting atmosphere. Since the yacht had begun on spec, Francesco Paszkowski Design selected just one wood and one stone—teak and limestone, respectively—to use throughout. The owners of Monaco Wolf liked the simplified approach.

While Monaco Wolf made her debut at the Monaco Yacht Show, her owner preferred keeping her out of the media until just recently. The video above gives you glimpses of her serene interior and comfortable alfresco spaces.