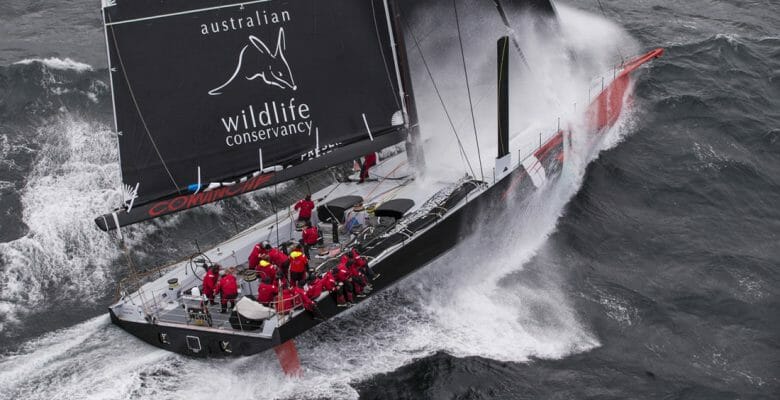 Even landlubbers who don’t follow professional yacht racing can’t help but get caught up in what’s going on in the Caribbean right now. There, during the annual Les Voiles de St. Barth, there’s a showdown between two superb super-maxis: Comanche and Rambler.

As you may recall, the 100-foot (30.5-meter) Comanche was built by Hodgdon Yachts last year, commissioned by notable yachtsman Jim Clark as a record-breaker. She already set a record during her construction, becoming one of the largest single-hull infusions undertaken stateside. (She’s built entirely of carbon fiber and composite.) Comanche was clocked doing 30 knots during sea trials last summer.

Interesting enough, Rambler 88 was in build the same time as Comanche. She launched last winter at New England Boatworks in Rhode Island. Like Comanche, Rambler 88 features carbon composite construction. Her owner, the experienced racer George David, who has had a few previous “Rambler” yachts, calls her “the little boat.” It’s due to her being smaller than her predecessors, plus a good 12 feet shorter than Comanche and other competitors that were in his sights during the build.

Comanche and Rambler 88 raced each other for the first time on day one of the Les Voiles de St. Barth. Comanche won that matchup on Tuesday. Her skipper, Ken Read, comments in the video below, “Anytime you beat your arch rival, it’s a good day.” While Comanche did indeed finish first then, as well as today, on corrected time she trails Rambler 88. Racing continues through Saturday, so stay tuned.