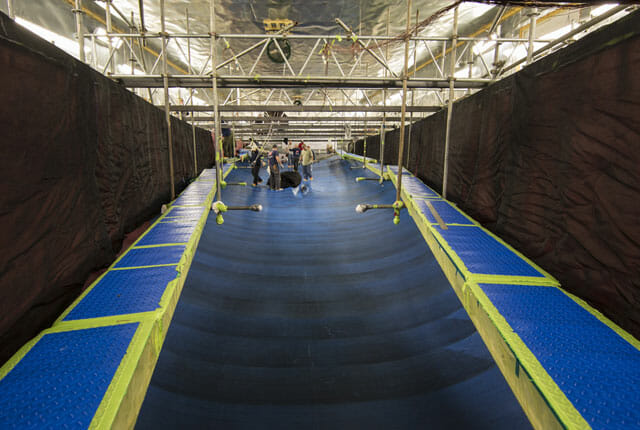 When word broke earlier this year of Hodgdon Yachts building a 100 Super Maxi for Jim Clark, yachting and racing fans alike went nuts. This 100-foot (30.5-meter) pre-preg yacht, to be called Comanche, is now a few weeks from launch at Hodgdon Yachts.

The Maine-based builder is widely known for its expertise in cold-molded construction. It’s equally adept with advanced composites. Some of the projects that Hodgdon Yachts has built with those composites have been governed by confidentiality clauses, restricting publicity. Hodgdon Yachts is under a similar confidentiality agreement regarding Comanche. For now, it can reveal that the oven used to cure the hull and superstructure is the largest one in marine service in the United States. Furthermore, Hodgdon Yachts built the oven itself. Comanche has one of the largest single-infusion hulls constructed stateside, and even globally.

The bigger, more specific details about Comanche have come from members of Clark’s project-management team. One such person is Ken Read, president of North Sails Group. Read is a well-known sailor and has helmed previous yachts belonging to Clark. “This boat isn’t for around the buoys,” he tells Sailing World. “We want to tick off every major race.”

The first such event that Comanche is set to participate in is the Rolex Sydney to Hobart Yacht Race. Starting December 26, it’s among the most influential in the world and covers 628 nautical miles. Read says Clark wants to also break the Transatlantic record aboard.

When you consider that Comanche is being built within a 12-month timeframe, the ambition is all the more apparent. Comanche bears naval architecture from Van Peteghem Lauriot Prévost (VPLP) and Guillaume Verdier. Each design studio has previously collaborated on racers. VPLP and Hodgdon Yachts’ in-house engineering department further have been working closely. Equally noteworthy, Hodgdon Yachts is building every component of Comanche, down to the steering wheels.

We don’t yet know how fast Comanche will be. The lightweight construction and design, however, hold a lot of promise. Stay tuned for her launch, mast-stepping, and transport to Australia.