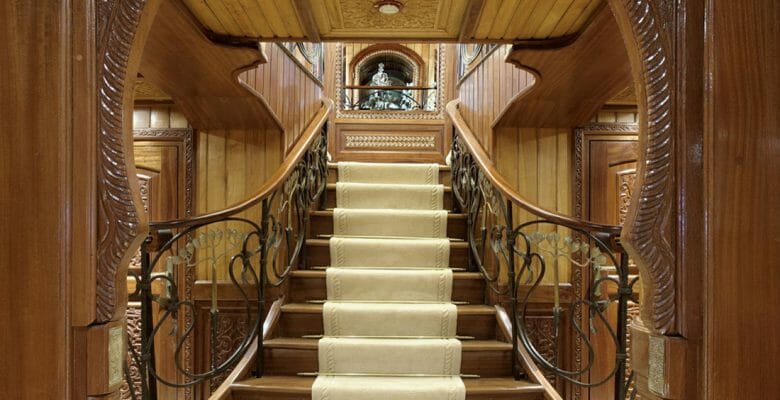 If walls could talk, no doubt the bulkheads aboard La Sultana could tell many an astounding tale. Built in 1962 as Aji-Petri, a Russian passenger ship plying routes from Odessa to Istanbul and more, she was serving quite a different purpose eight years later: serving as a spy ship in the North Atlantic for the Soviet Union. (Officially, she was a radio vessel for the International Telecommunication Union, an agency of the United Nations.) While the spy equipment is long gone, her history so impressed a hotelier that the vessel was acquired in 2007 for conversion into a luxury charter yacht. That conversion took seven years and 1.2 million man-hours. The result: The 214’6” (65.4-meter) La Sultana is now welcoming charter guests aboard her decks.

La Sultana belongs to the La Sultana Group, which operates two luxury resorts in Morocco. The hotelier had her aluminum superstructure rebuilt in keeping with her original lines. For compliance with RINA classification, a good deal of steel hull and deck structures were replaced, too. In fact, there’s hardly an area aboard La Sultana that wasn’t completely rebuilt or refurbished—though, interesting enough, she does have her original propeller. Of course, it’s connected to a more modern powerplant, a single Mitsubishi, which permits a reported 11-knot cruise. 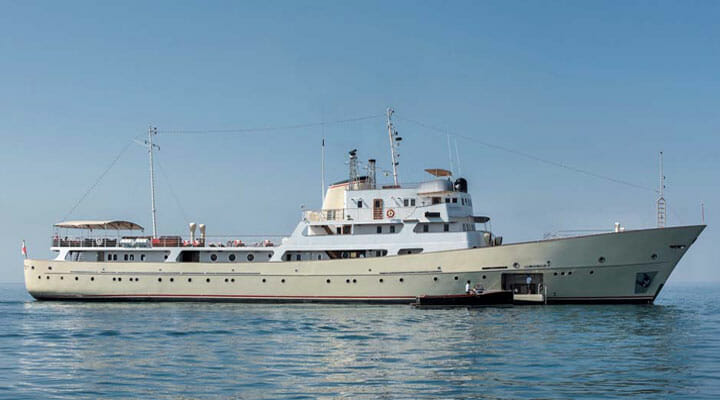 La Sultana Group placed an unrestricted budget in the hands of the project-management team. That team included the French naval-architecture firm Orion Naval Engineering. Onboard La Sultana, you’ll find a hydraulic boarding/swimming platform toward the bow to starboard, a helipad, a saltwater hot tub and sunpads on the raised bow, her original masts, and intricately detailed interior spaces that simply have to be seen to be believed.

The photo gallery here takes you through many of La Sultana’s spaces, from the saloon to staterooms, to formal dining and on-deck relaxing. She’s managed by Guernsey-based Bachmann Yachts.