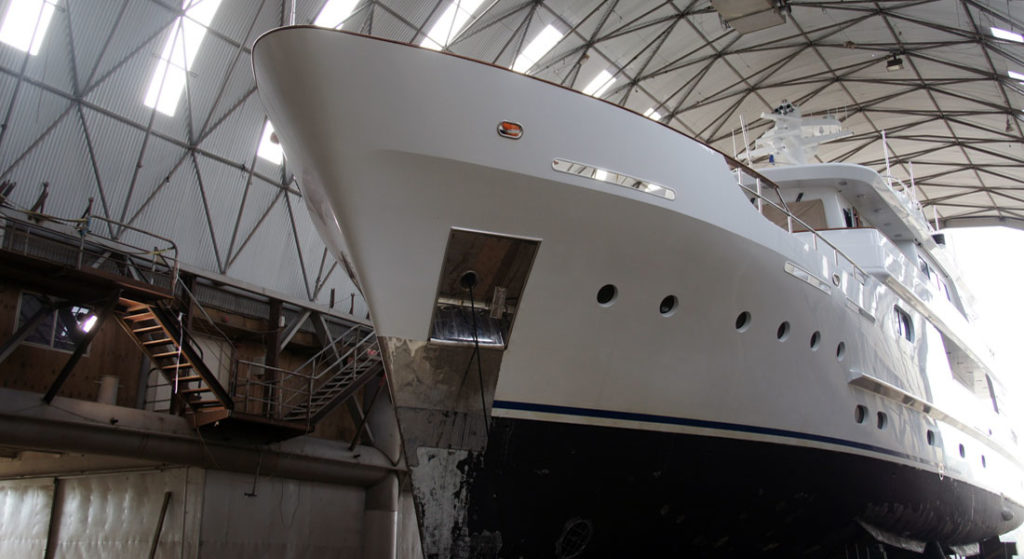 Relentless seems a fitting name for an expedition yacht. In keeping with her persistent pursuit of far-flung shores in the South Pacific, the 10-year-old megayacht needed sprucing up, systems upgrades, and her class survey. Oceania Marine recently handed Relentless back to her owners and crew following three and a half months of extensive work.

At 110 feet (33.5 meters), Relentless launched in 2006 from Kingship, with design by Setzer Yacht Architects. She was Kingship’s first project. Equally notable, she was the first Asian-built megayacht to meet Lloyds classification and MCA regulations. Furthermore, she has a reported range of 3,000 nautical miles.

To keep her consistent with all of that, New Zealand’s Oceania Marine handled much of the work itself. Subcontractors assisted in servicing the main engines and electrical system. Otherwise, Oceania Marine’s own coatings team cleaned up corrosion and repaired paint problems. The in-house engineers tackled the 10-year Lloyds survey works (outside of the above-mentioned engines and electrical).

One of the biggest challenges came from the interior. Relentless had encountered a storm prior to her arrival, unfortunately suffering water damage as a result. Oceania Marine’s Oceania Interiors took care of stripping the damaged materials and installing new paneling and more. (In related news, Oceania Interiors is the new name for Specialised Manufactured Interiors, an independent company. Oceania Marine acquired the brand several months ago.)

All of the work done by Oceania Marine complements equally extensive tasks completed elsewhere in 2013. That year, Relentless gained a bar on her uppermost deck, all new decking, and new paint. She remains kitted out with an outdoor cinema, extensive watertoys, and gear for diving, fishing, and snorkeling.

You can sample those, and more, yourself aboard Relentless. She’s back cruising and chartering in Fiji for the season. Her base rate: $85,000 per week.