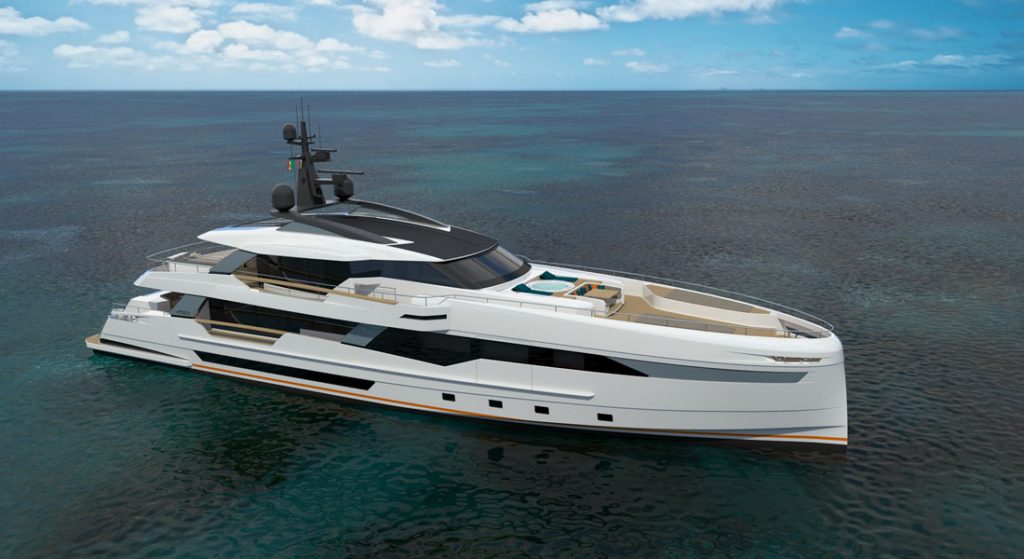 Less than a week after Wider Yachts’ announcement of the Wider 130, you can now explore the onboard spaces, virtually. You won’t be alone, either. Her YouTube video, embedded below, has accrued more than 2,500 views in just five days.

Yacht builders often introduce either a smaller model or a larger one. The 130 is certainly the “baby” sister to the Wider 150 and Wider 165. (The 165 is under construction for completion next year. Meanwhile, hull number one of the Wider 150 is cruising now, named Bartali.) However, you can also argue that the Wider 130 is a “big” sister, given that the Italian builder also offers the Wider 42 powerboat.

Regardless, this new megayacht carries on the idea of making life afloat feel more open and spacious. Floor-to-ceiling windows span the saloon, for example. Yet another example: the ability to lower the bulwarks just beyond these windows. Add in the fold-down balcony in the master suite, and the main deck gets the lion’s share of attention.

However, the main deck isn’t the only place to see in the video. You get a quick view of the upper-deck lounge, where 915 square feet (85 square meters) flows from inside straight outside. It does so because the curved, sliding-glass doors separating the two need not stay closed. You and 11 others can take in the sunsets while drinking sundowners here. Consider staying to dine under the stars, too.

“Consider” is the operative word. Wider Yachts has started the Wider 130 on spec. So, you have time to step into the project with the interior designer of your choosing. (For full details on the suggested interior layout, read about how the model is widening the builder’s megayacht reach.)

Something the video doesn’t show, but is important to Wider: the propulsion system. A battery bank will permit the megayacht to run nearly silently compared to typical diesel gensets for up to six hours at anchor. For cruising, the yacht has electric motors with pod drives, which are also quieter than typical diesels.