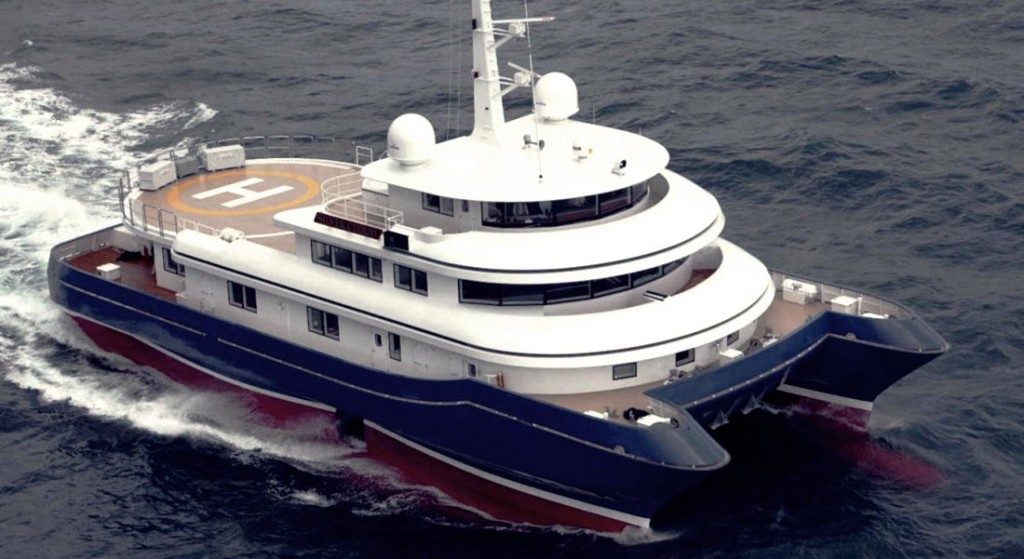 One of the most-traveled megayachts is now on the market. She’s Silver Cloud, which has put nearly 100,000 miles under her hull over the past decade. If ever a yacht were ideal for adventure-seekers, this is the one. From the Northwest Passage to the South Pacific, Silver Cloud has been there. What’s more, she’s done so while keeping one key passenger susceptible to seasickness quite comfortable in rough seas as much as flat-calm conditions. In fact, that’s the very reason the 134-footer (41-meter) came to be.

Oftentimes onlookers don’t even realize Silver Cloud is a superyacht. It’s due to being a SWATH, a Small Waterplane Area Twin Hull vessel. Similar to catamarans, SWATHs have two hulls. They’re submarine-shaped, too, attached to the rest of the vessel via narrow struts. The sub shapes are the only parts under water. This therefore minimizes the impact of wave motion on the rest of the yacht.

Silver Cloud’s owner, Alexander Dreyfoos, had owned traditional motoryachts for many years. Unfortunately, his wife Renate, whom he married in 2000, couldn’t enjoy cruises due to seasickness. Even stabilizing fins didn’t help. Dreyfoos explained to us last year how he learned about SWATH design, which dates back to the 1930s:

After much research, I found three companies that had built commercial SWATH ships and visited all three. Abeking & Rasmussen, who we ultimately contracted with, arranged for an experimental ride onboard a pilot ship in Germany in the very rough waters of the North Sea. Renate was able to sit through the ride, reading and knitting without a hint of seasickness. I was convinced. I thought it was so much more important to have a vessel that we could travel the world on without anyone getting seasick, than having that conventional-looking yacht. It has truly proven itself to be an expedition yacht.

Dreyfoos took delivery of Silver Cloud in 2008 and hasn’t looked back since. The yacht has a reported 4,000-nautical-mile range at 10 knots under Caterpillar power. She has circumnavigated the globe as well.

If those types of adventures are on your bucket list, know that Silver Cloud can accommodate a party of 12. All four of the guest staterooms—two kings, a queen, and a twin with Pullmans—sit on the main deck, with oversize ports. The owner’s suite, though, deserves special attention. It occupies the 58-foot (17.8-meter) beam. Boasting 180-degree vistas, it has a private alfresco area forward with a helm station, should you wish to take the wheel occasionally. His-and-her heads, with hers leading into the gym, plus two offices make it “suite” indeed.

From the helicopter deck just aft of the owner’s suite to a large spa pool, Silver Cloud offers a lot outside. Further highlights inside include two dining areas and two relaxation areas just in the saloon alone. Visit her website to see images.

And, you can visit Silver Cloud herself at the Fort Lauderdale International Boat Show in November. She’ll be part of the IYC display.