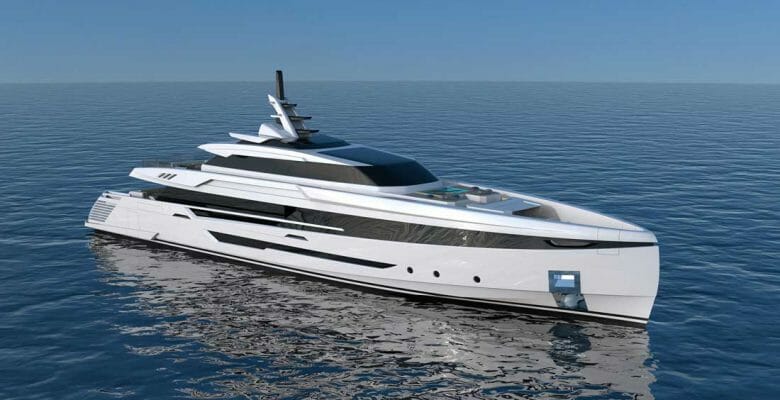 Construction is about to begin on a megayacht referred to as a Columbus S 50 project at Columbus Yachts. LOA is just shy of 50 meters, hence the model name. It’s 162’4”, or 49.5 meters.

The owner is a longtime friend of Giuseppe Palumbo, CEO of Palumbo Superyachts, which owns Columbus Yachts. The same owner also owns a yacht built by one of the Palumbo Superyachts brands. (It further owns ISA Yachts.) The shipyard has not specified which brand, however.

The new Columbus S 50 should see delivery in 2020. She features all-aluminum construction, taking place entirely at the yard in Ancona, Italy. Palumbo Superyachts’ in-house naval-architecture department has given her a semi-displacement hull design. This should permit cruising at 15 knots and a top speed of 20 knots with 2,000-hp MTUs. Of course, the megayacht will have transatlantic range, too. Both styling and interior design are by Luca Dini Design. Take note of the vertical bow, for example, a detail quite popular among today’s buyers. It also happens to be a design element aboard another Columbus project, the Columbus 40 Sport Hybrid. Overall, the Columbus S 50 seems quite sleek.

Coming in at 499 gross tons, the new megayacht is for an owner’s party of 11, as well as a crew count of 11. Interesting enough, seven cabins accommodate the crew, whereas five staterooms take care of guests. However, the guest accommodations spread across the Columbus S 50’s three decks. Unfortunately, few other specifics are available. Columbus Yachts just says the owner has asked for “numerous unprecedented solutions.”

For now, the shipyard does mention that the Columbus S 50 has an ample enough bow to hold the entire crew. Interior areas should be ample, too, due to the 30-foot (9.15-meter) beam.