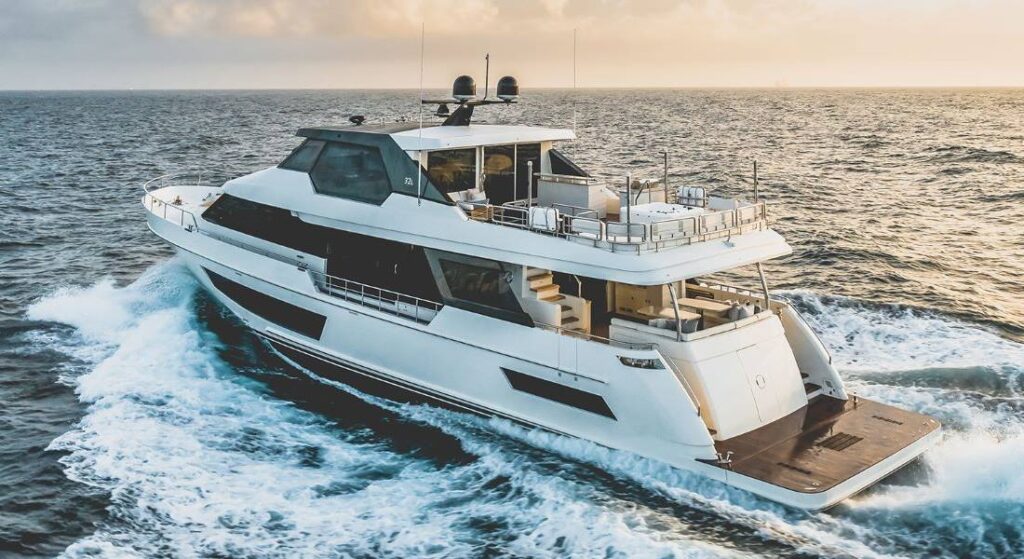 Sometimes, funny things happen just before boat shows. Even stranger things happen before boat shows during a pandemic. The Ocean Alexander 32L (part of the shipyard’s Legend series) that was supposed to appear at the recent Palm Beach International Boat Show didn’t make it. But, it was for a good reason. The yacht sold before she ever arrived.

The 105-footer (32-meter) bears styling and interior design by longtime shipyard partner Evan K. Marshall. She replaces the successful Ocean Alexander 100, which resulted in nearly 20 deliveries over the course of her six-year history. Being a semi-custom model, naturally the Ocean Alexander 32L offers owners a variety of choices for soft goods and room arrangements. Additionally, while the yacht retains some of the 100’s traditional appeal, the megayacht is certainly in keeping with more contemporary tastes. For instance, Marshall and Ocean Alexander make better use of interior volume, therefore lending a roomier look and feel. This applies to the main-deck master suite—one of five staterooms onboard—as much as the relaxation and entertainment areas.

The more modern approaches attracted the buyer who acquired the yacht set to appear at the boat show. According to the owner’s broker, James Corts of MarineMax, the customer was already familiar with Ocean Alexander, having bought an 85 on the brokerage market in recent years. Interestingly, a few weeks ago, the client visited a 100 with Corts on the brokerage market, too. However, upon learning about the 32L, “they preferred the updated styling,” he explains.

Notably, because of the pandemic, “the owner could not travel,” he continues. So, Ocean Alexander and MarineMax leveraged today’s digital video tools to provide the client with access. Corts says. Furthermore, “the owner and captain spent hours with the commissioning team at East Coast Yacht Group via Facetime,” he adds. And, a surveyor provided input during inspections and sea trials.

Even“without stepping aboard the yacht even once,” Corts concludes, the owner decided the Ocean Alexander 32L was a perfect fit. Currently, the yacht is en route to the owner’s homeport for spring and summer cruising.