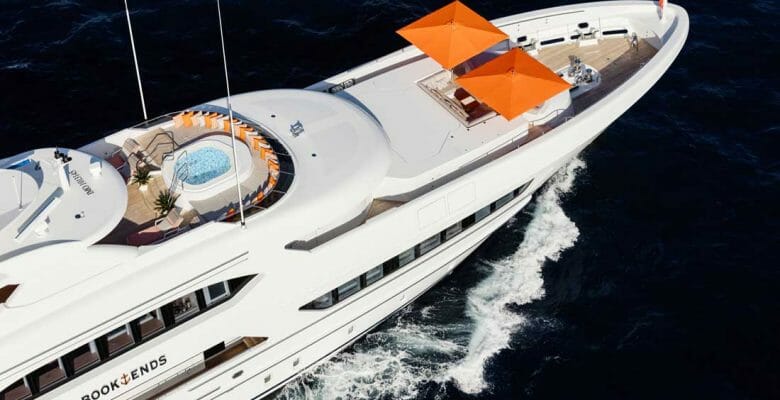 In looking at the bold pops of orange aboard Book Ends, those of you familiar with The Netherlands might make an assumption. Surely, you may think, the owners are Dutch. (Orange is a popular color in the country, partly due to the royal family being the House of Orange.) However, the owners of this 154-footer (47-meter) are American. What’s more, they’ve owned 16 yachts and megayachts previously over the years, but never a Dutch yacht. Until now.

Some yacht buyers consider multiple shipyards across multiple countries. The couple behind Book Ends, by contrast, was single-minded. They wanted a Dutch-built, steel-hulled yacht for spending most of their time in the Med. Interestingly, they further didn’t want to build new. Having started Book Ends on spec, as Project Ruya, Heesen Yachts ticked the boxes for them. In addition, even though the yacht was far along toward completion, Heesen afforded opportunity to adapt her without losing precious cruising time. 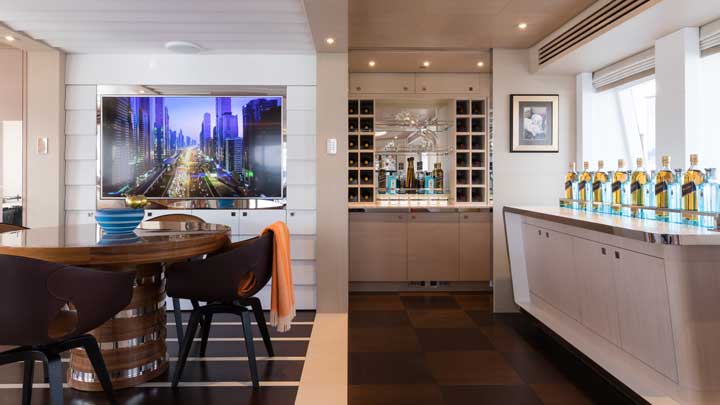 Book Ends belongs to Heesen’s longstanding 47M displacement series. This meant the owners could count on a range of 4,000 nautical miles at 12 knots, for example. They could additionally count on accommodations for 10 to 12.

Those accommodations were already in place, as was much of the originally planned decor from Bannenberg & Rowell Design. Since the overall woods and finishes were relatively neutral, though, they didn’t pose a significant issue. The owners of Book Ends introduced their color preferences—including colorful artwork that commands attention from room to room—amid oak paneling and stained walnut soles.

They also introduced more must-haves like televisions inside and out. The sky lounge received the most changes, with a games table situated near a larger-than-planned television, plus an eye-catching bar (above). While the initial design called for a bar, too, it was behind doors. The owners of Book Ends made it a showpiece as much as their art collection is.

Enjoy this virtual tour of their cruiser, featuring favorite spots like the bow seating area: