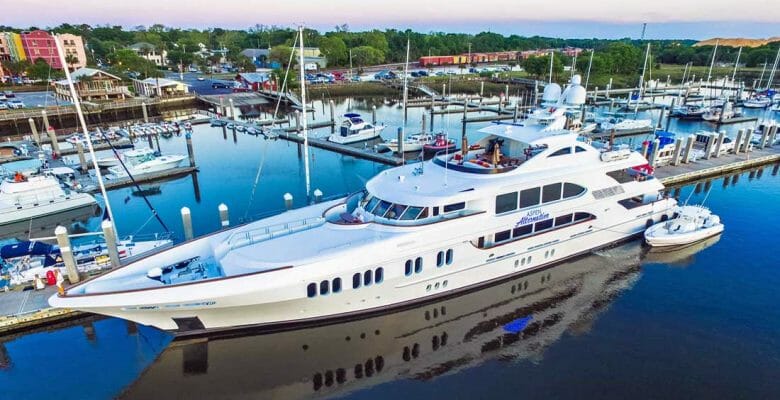 Attention, movie buffs: The reason to see the new version of Overboard isn’t for stars Anna Faris, Eva Longoria, or Eugenio Derbez. It’s to see Aspen Alternative play the role of the megayacht that’s key to a few scenes.

Overboard is a remake of a same-named movie from 1987. In it, Goldie Hawn portrays a snobby, wealthy woman who, with her husband, owns a megayacht, Immaculata. (Attessa, a 144-footer/44-meter now known as Huntress, served as Imaculata.) She hires a carpenter, played by Kurt Russell, to do work aboard. Dissatisfied with his work, she refuses to pay him and tosses both him and his tools overboard. Later that evening, when the megayacht departs, Hawn falls overboard herself. She ends up in the hospital with amnesia. Russell sees her on the TV news and hatches a revenge plot. He not only pretends he’s her husband, he convinces her that his four poorly behaved kids are their children.

The new Overboard movie follows the same general plotline. This time, however, there’s a role reversal. Eugenio Derbez is a stuck-up megayacht owner who hires Anna Faris to clean his yacht. He unjustly fires her, then later falls—you guessed it—overboard. While on screen the yacht appears with the name Birthday Present, she’s really the 164-foot (50-meter) Aspen Alternative.

The filmmakers chartered Aspen Alternative in British Columbia last summer for 19 days. Jennifer Saia of B&B Yacht Charters helped make the introductions. The filmmakers initially contacted Jason Crosby of Crosby Marine Film Services, a company specializing in on-water shooting, location scouting, and more. They did so well in advance of the planned shoot. Jason Crosby reached out to Steve Doyle of Cambridge Yacht Group, a brokerage firm. The two had secured a yacht for a previous film. But, this time, Doyle connected Crosby to Saia, having done a good deal of business with her over the years.

Because few yachts charter in the Pacific Northwest, Saia had a relatively short list for the producers to consider. “They wanted as large, modern, and as luxurious as possible, plus preferred to have a Jacuzzi, as several scenes revolve around this,” she says. Naturally, the owners and their yacht managers wanted to review the filming parameters, among other details, before allowing the yacht to be considered. Saia arranged for the producers to see two yachts, including Aspen Alternative, in person—in Fort Lauderdale and St. Maarten, no less, given the timing. “Aspen Alternative was the clear best choice from a visual standpoint, the positive attitude of the crew, yacht manager, and the owner,” Saia says.

Saia flew out to see some of the first filming days. “You would be amazed to see how much equipment and people it takes to do one small scene!” she recalls. “Even having arranged four of the megayacht charters for the TV series Below Deck, and having 30 years of charter experience, Saia adds that she learned a lot. She credits Jason Crosby for part of this. “It was one of the most rewarding experiences to work with Jason,” she explains. “He is an absolute professional!”

Capt. Nick Fenley of Aspen Alternative thoroughly enjoyed the experience, too. That’s him at left in the photo above, with actor Per Graffman (and photobombed by Anna Faris). Joining the yacht close to the film date, he and the crew were to be on hand for hosting the filmmaking teams, close-quarters maneuvering, plus filming at sea. However, a lot of advanced prep work took place under their watchful eyes, too. For instance, about 50 carpenters, electricians, prop masters, and more transformed the megayacht into Birthday Present.

Filming itself ran the gamut from simple to complex. Some days at sea, “we had little to do other than take instructions on what they were looking for in lighting conditions,” Fenley says. For others, the director wanted the yacht “literally going the wrong way in many instances, but under the full cooperation of the Canadian Coast Guard and with safety boat escorts.” At yet other times, he and the crew were safety spotters on deck for maneuvers, then needed to quickly crouch down for filming to take place. Thankfully, overall, “we hit all the right moves to satisfy their shots,” he says.

Also thankfully, Aspen Alternative didn’t get terribly banged up from all of the equipment. “There are more tripods and lighting rigs and gaffes than you can possibly begin to control,” Fenley says. If you’d like your own yacht to appear in a movie, he recommends ensuring the charter contract spells this out. Similarly, “expect damage,” so ensure the contract spells out compensation. And, finally, make sure you work with a company like Crosby Marine Film Services. “You need people that know how the ‘Hollywood circus’ is going to be.”