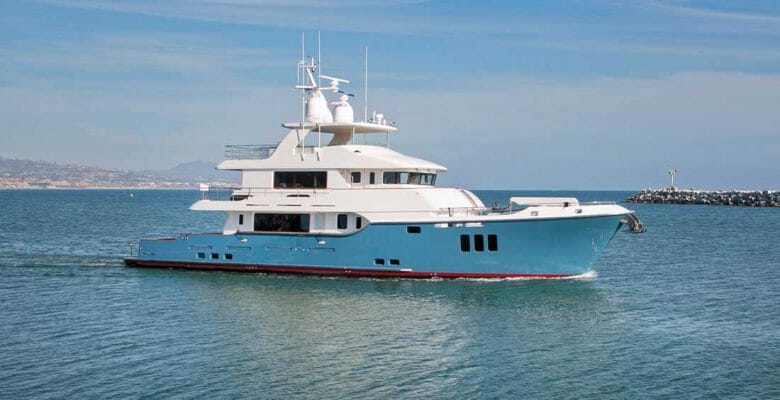 The video below has been online for only one month. Yet, it already has more than 10,000 views. That speaks to the popularity of Nordhavn yachts in general, and specifically the first Nordhavn 100, filmed on sea trials. Christened Serenity, she’s the second-largest creation in Nordhavn’s history.

Coming in at 101 feet (30.79 meters), Serenity is several days into her shakedown cruise, in Mexican waters. While the Nordhavn 120 exceeds her in size, this Nordhavn 100 is an entirely custom megayacht. Still bearing the rugged looks the brand is known for, the yacht further share much of her hull design with the Nordhavn 86/96. She then adds on a proper cockpit for fish fighting, plus a swim step. These increased the LOA by three feet (0.9 meter).

“Proper” is a proper word for the cockpit, too. Similar to many large sportfishermen, the Nordhavn 100 has a mezzanine deck. Alternately, some people call this area a California deck. It’s a raised area against the house for seating, often with extra stowage below. Regardless of terminology, it’s an area completely separate from the open fish-fighting space. Serenity’s owner is an avid fisherman, but also an avid cruiser. The mezzanine therefore lets guests who aren’t participating in the angling activities still enjoy the action. Simultaneously, it leaves the person with the rod in hand free to move around unobstructed.

Just as this Nordhavn 100 reflects her owner’s ideas outside, the same is true inside. Serenity includes five staterooms for him and his guests, plus crew cabins for four. The master benefits from the main deck’s 24-foot (7.32-meter) beam. Throughout the staterooms and the relaxation spaces, you’ll find walnut wood, stonework, and stainless steel inlays. The owner worked with Destry Darr Designs for the look, which additionally includes vibrant artwork.

Speaking of vibrant, the fishing action so far has certainly been exciting. Nordhavn says the owner has spent most of his time in the cockpit with a rod in hand. He’s reeled in enough dorado and wahoo for a few lunches and dinners, too.

Here’s to more successful fishing wherever this Nordhavn 100 ventures. She’s reportedly capable of a 3,000-nautical-mile range at 9 knots. Her reported top speed is 12 knots, coming from twin 600-hp Caterpillars.