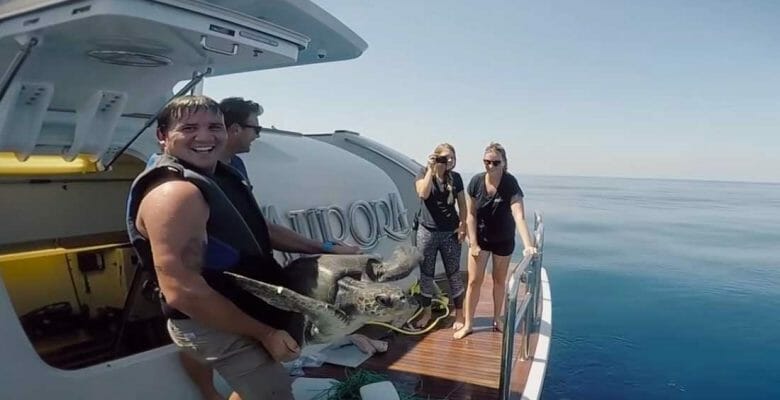 A year ago, Nordhavn’s management team thought it would be fun to create a film festival, featuring the movies its customers make. They travel the world, so understandably these yacht owners have fantastic footage from their travels, and experiences. Little did the team anticipate, though, that the Nordhavn Film Festival would attract more than a dozen submissions. Nor did the team anticipate that one, “Aurora Saves,” would touch so many people around the world. In less than a month on YouTube, “Aurora Saves” has garnered nearly 7,000 views, and counting. It’s the story of how the owners of the Nordhavn 120 Aurora helped save sea turtles and dolphins entangled in line.

The film starts with the crew of Aurora setting off for a journey up the Pacific Coast of North America, a nearly two-week trip. Their happy plans had a startling interruption, in the form of a dolphin whose tail was so deeply entangled that “it was not going to survive another day,” as Denzil Baynes, the first mate, puts it. “The exhaustion of this dolphin, you could see it in its eyes. It was ready to give up.”

“Aurora Saves” is the type of story, and footage, that grips your heart and refuses to let go. Then add in two large sea turtles even more entangled in line—plus two stingrays. It sounds like it’s straight out of Hollywood, but it’s not.

The nearly 10-minute film is worth your time to watch. You’ll understand just how the Nordhavn Film Festival judges decided to award its creators the $10,000 prize—and hy thousands of people have viewed it.