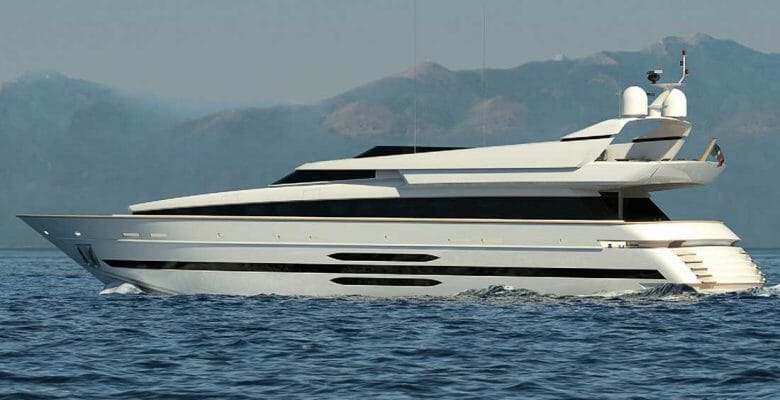 A ribbon-cutting ceremony on February 6 marked the official return to business for Cantieri di Pisa’s long-shuttered facility. While yacht construction may not be in full gear until 2021, the new owners are completing three partially finished megayachts. Furthermore, they’re renovating the build sheds and investing in new designs.

Established in 1945, Cantieri di Pisa shut down in 2010. Fellow yacht builder Mondomarine acquired it in 2015. But, Mondomarine laid off 30 employees there in March 2017, along with 70 at its own site in Savona. Mondomarine later entered bankruptcy liquidation, plus saw investigation for financial irregularities. These include fraud, false accounting, and invoicing for non-existent transactions. While the Palumbo Group took over Mondomarine’s facilities in late 2017, under a rental agreement, it did not attempt to rent or acquire Cantieri di Pisa. Interestingly, Baltic Yachts reportedly made a bid last summer. However, the court awarded the shipyard in October to a Sea Finance, a Genoa-based company.

Sea Finance, which acquired the yard for €2.6 million, has backing from two partner companies. One of them is Yotha, an online platform directly connecting charterers to yacht owners, thereby striving to make charter bookings easier and more accessible. The other is reportedly Group Cecconi, an investor in the Franchini Shipyard elsewhere in Italy.

“We want to develop the brand, bringing it back to historical splendor,” Pietro Comerro, president of Sea Finance, tells the Italian newspaper Il Tirreno. This includes building yachts similar to famous Cantieri di Pisa models like the Akhir series. But, it also means introducing new designs, too. Simone Marconcini, the shipyard’s new manager, tells the paper that aluminum yachts will be the priority, with fiberglass for smaller projects.

Before any of these can be built, Cantieri di Pisa intends to finish three megayachts sitting untouched for nearly two years. One is an Akhir 118 (36-meter), while two are Akhir 108s (33-meters). All three yachts are fiberglass, bearing styling by Carlo Galeazzi. Of course, the builder is offering them all for sale, with delivery in about a year. The 118 (pictured) should see top speeds around 26 to 27 knots, while the 108s should see a max speed around 29 knots.

The 22 shipyard employees who are currently on site should see their ranks grow in the coming months. All should see the facilities improve as well. “We will make a new premises,” Comerro tells Il Tirreno. Three large warehouses, originally built in the 1960s, are among the buildings set for renovation.